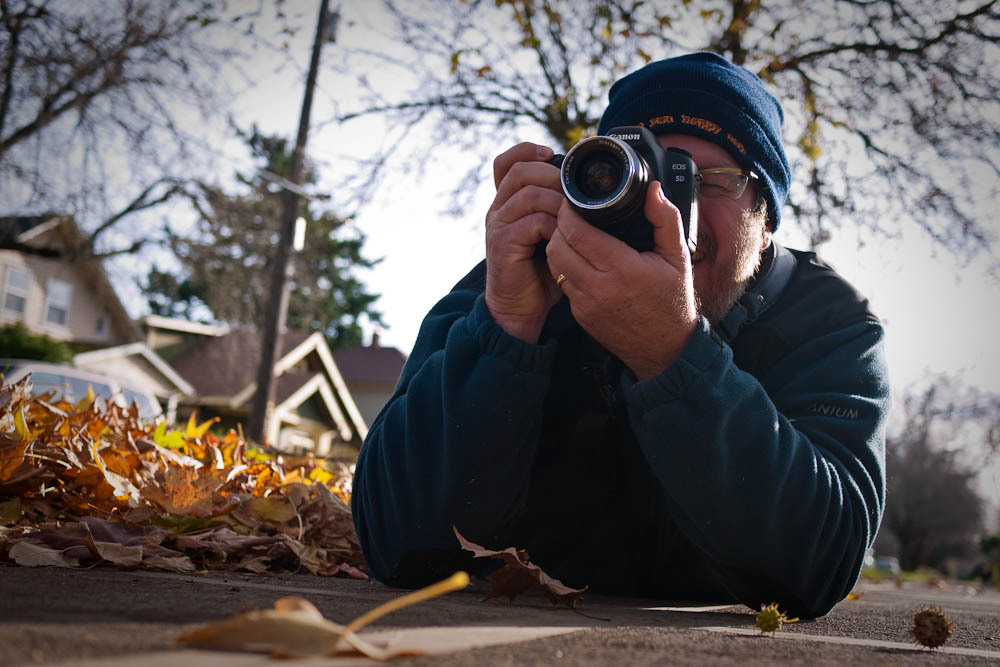 Duncan talks about The Daily Shoot, his and Mike Clark’s clever idea that is motivating hundreds of photographers to work at their craft every day.

Practice make perfect, right? That’s what we’ve all been told. I know that I heard it many times growing up as I was taking music lessons. At the time, confident in my own raw talent and ability, I dismissed the advice as patronizing and unreasonable. Either you had it or you didn’t. Well, not practicing didn’t work out so well. Looking back, I’m sure that I tortured everyone who ever heard me play a musical instrument.

As misguided as my youthful opinion about practice was, it turns out that my actions were proving my opinions wrong. There were two things back then that I devoted significant practice time to that would serve me very well later in life. 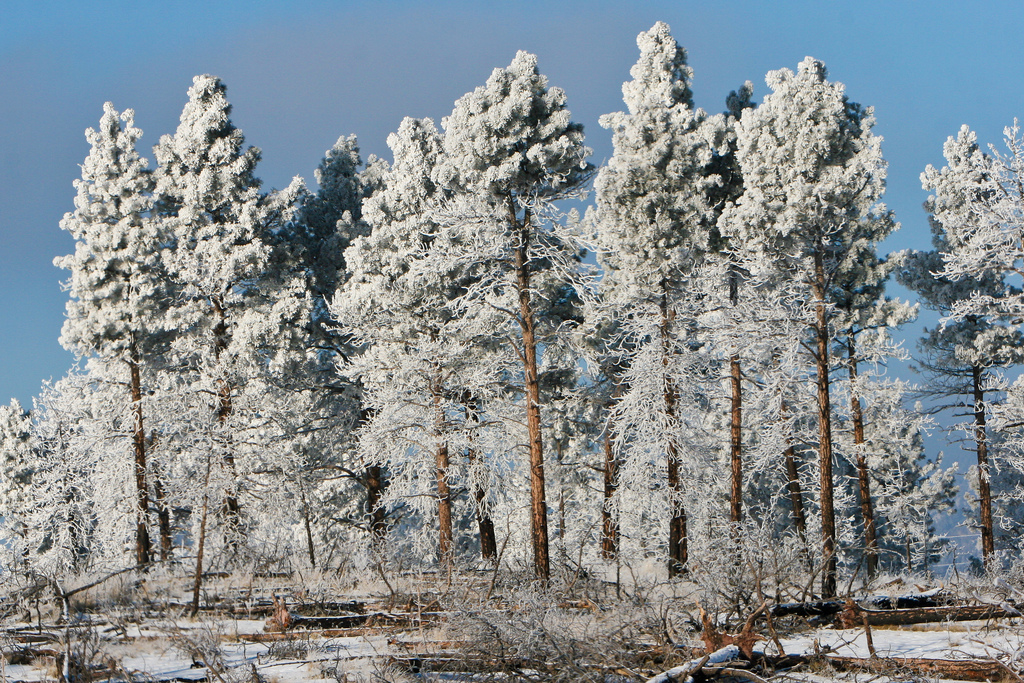 The first was dinking around with computers of one kind or another. My father purchased an early Apple ][+ and I spent many hours on many late nights peeking and poking that Apple ][+ and subsequent computers. Ludicrous amounts of time. So when the World Wide Web emerged in the 1990s, I was set. It turns out that what I had been doing was practicing. I put in so much practice, in fact, that it was an easy and natural transition from architecture school into a different kind of architectural career—one focused on building web applications and development frameworks.

The second thing I devoted a lot of time while growing up—in fact, through school and into my career as a software engineer—was photography. I picked up my first camera at a very early age and my grandmother fueled my interest by teaching me the basics of the darkroom. My parents couldn’t leave film around and expect it to stay unexposed. 110. Disc. 35mm. I shot it all. Later on, I documented my travels around the world while working on software with digital cameras. With all that practice, it was an easy and natural transition from a career in software into a career in photography.

Practice As Play, not Drudgery

Natural, that is, looking back on it. It’s only in hindsight that it becomes obvious that what I was actually doing was practicing at both software and photography. At the time, I just thought I was just having fun.

But it didn’t stop there. As accomplished as I might have been when I started shooting professionally, it’s what happened next that surprised me the most. As I shot thousands and then hundreds of thousands of frames, I noticed that I continued to acquire skills, and at a rapid pace. My relationship with and understanding of light deepened. And I finally sorted out that I was good at the things I was good at not because I was talented or gifted. It was because I was practicing intensely all that time and learning all the time—even though it didn’t feel like learning. I’m still learning today, and will be for as long as I use the camera.

Practice makes perfect. It keeps honing your skills for as long as you keep practicing. 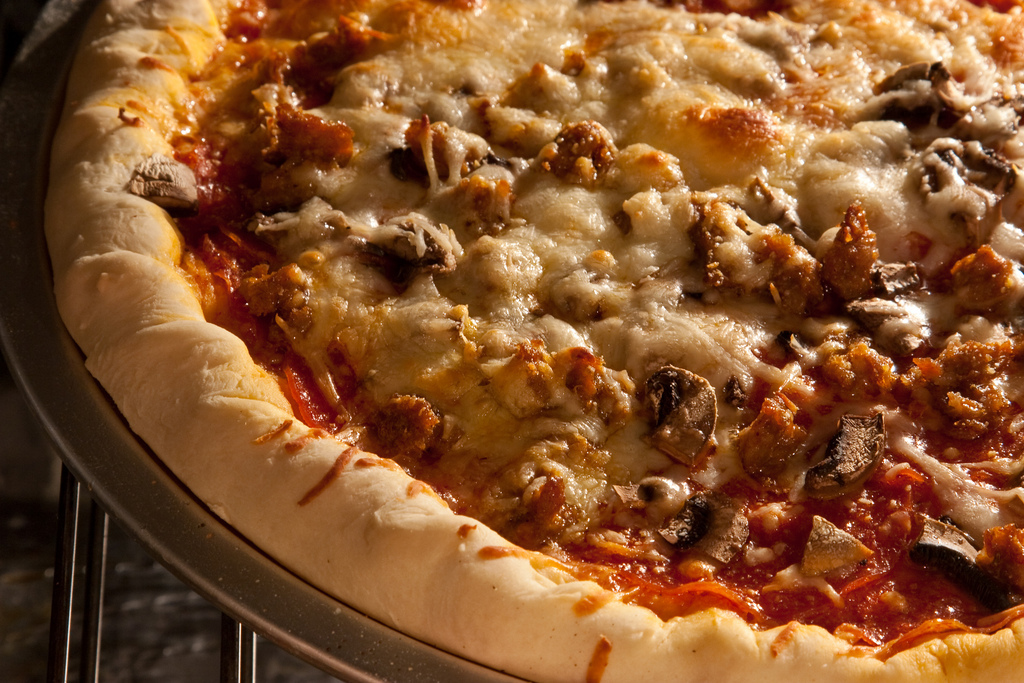 If practice does indeed make perfect, then how does one set about it? Especially for an art and craft like photography, which most people practice just for the fun of it? Obviously, you don’t want to sit down and make it an obligation. That way is doomed to fail, just like making kids take music lessons when they don’t see the point.

What if, instead of a structured obligation, somebody would just nudge you and say, “Hey, why don’t you take a picture of something blue today?” It might be just enough of an excuse to get you to pick up the camera. Once you picked it up, you might spend some time tinkering with it. And, along the way you would pick up some practice. Practice that would feel like play, not like drudgery or an obligation.

This idea has been at the core of a number of conversations I’ve had with Mike Clark, a fellow software pro and amateur photographer. As Mike’s skills with his camera improved, he started looking for ways to keep practicing—some way to give himself a little push to get out there and use his camera. We always left those conversations off with the thought that, yes, it’d be nice, but we couldn’t see how to make it a reality for ourselves, much less for anybody else.

Then one day we hit on the silly idea of using Twitter to give us a daily photographic assignment of sorts. Not a formal project, mind you. Just a quick nudge to see if we could encourage ourselves to pick up the camera and do something with it. Twitter provides a perfect medium for this. By forcing an assignment to fit into 140 characters, we’d ensure that it would be short enough to be wide open to interpretation. Perfect for letting people practice—and play around—from a quick and straightforward starting point. 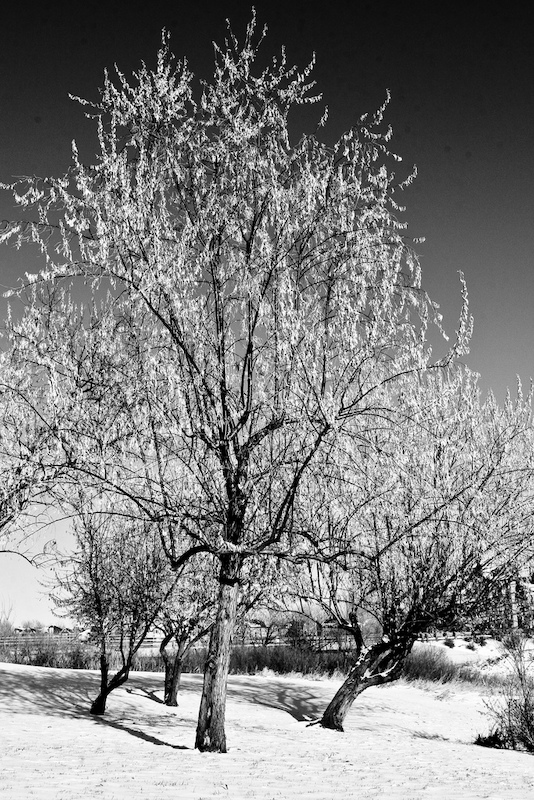 Once we had that idea, it was a short series of steps to find CoTweet—a service that allows you to schedule tweets in a cron-like fashion—and then batch up a couple of weeks worth of assignments. In the span of a few hours as Mike and I played around, The Daily Shoot was born.

Within a few days, we’d proven to ourselves that the concept was sound and announced it to the world using the @dailyshoot Twitter account. We followed up shortly with a simple website and then a few weeks later with a much more sophisticated website built with Ruby on Rails, a framework that both Mike and I have a lot of experience in.

Along the way, thanks entirely to Twitter’s easy distribution of a simple idea around a large social network, we’ve built up quite an interesting worldwide community of hundreds of photographers who take the challenge and respond to our daily nudge to make a photograph. Many of these photographers respond to our assignments with a tweet that links to a photograph that they made. Better yet, it looks like many are using the assignments as a stepping stone to spending more time with their cameras. 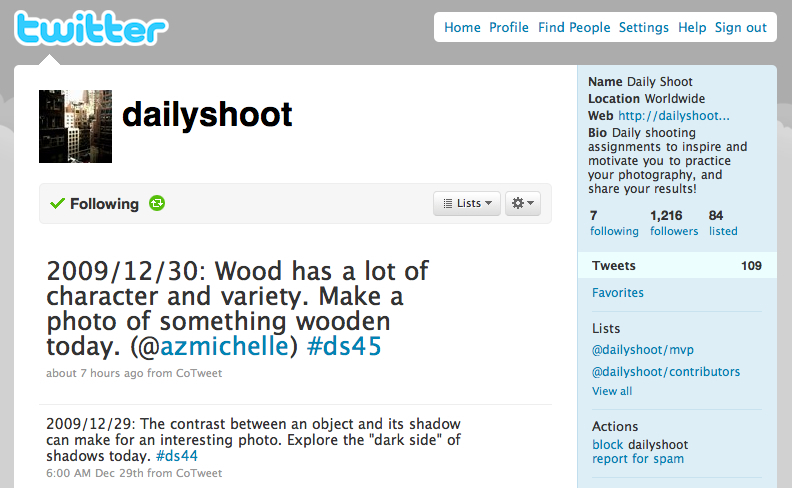 In addition to photographs, we’ve received a lot of feedback. Some of the feedback has prompted us to add a feature. For example, anybody can now suggest an assignment using our website. This was a direct result of an exchange that I had with Lyza Gardner, a Portland-based photographer who is also a co-host of the Social Photo Talk podcast. For the most part, however, the feedback has been an outpouring of shout-outs for encouraging photographers to get out there and shoot.

That’s the entire point, of course. The Daily Shoot isn’t a contest. There are no winners and no losers. There are no grades and no recitals. There aren’t even any real rules to speak of. The only things we ask are that photographers don’t pull something out of their archives to link up, and that they edit their photographs down to one submission for any particular assignment. Beyond that, it’s wide open. If you miss a day or a week, that’s fine. Jump back in whenever. After all, the thing we’re trying to do is to continually encourage photographers to make photographs, not just “take a shot” once in a while. In a way, we’re providing a good excuse for people to have a bit of fun with their camera.

What’s next? That’s a good question. Mike and I have been listening to people who visit the site, who follow @dailyshoot on Twitter, and who have been providing lots of feedback. We want to keep The Daily Shoot evolving. Quite honestly, working on the website is the most fun that we’ve had working with software in a while. It’s a great marriage of things that interest us and it’s fascinating to watch the community respond. Plus, I’m humbled to think that we’re helping others in some small way do something they love.

James Duncan Davidson (@duncan) is a photographer and recovering software engineer. He travels the world making photographs at interesting conferences such as TED, Web 2.0 Summit, and RubyConf. His website is duncandavidson.com.

The photo of Rick LePage going low and finding the right angle is by Duncan Davidson. Mike Clark made the two winter tree photos and the pizza photo. They are used here with the permission of the photographers. The pizza was made by Daniel Steinberg.