Thoughts on the iPad 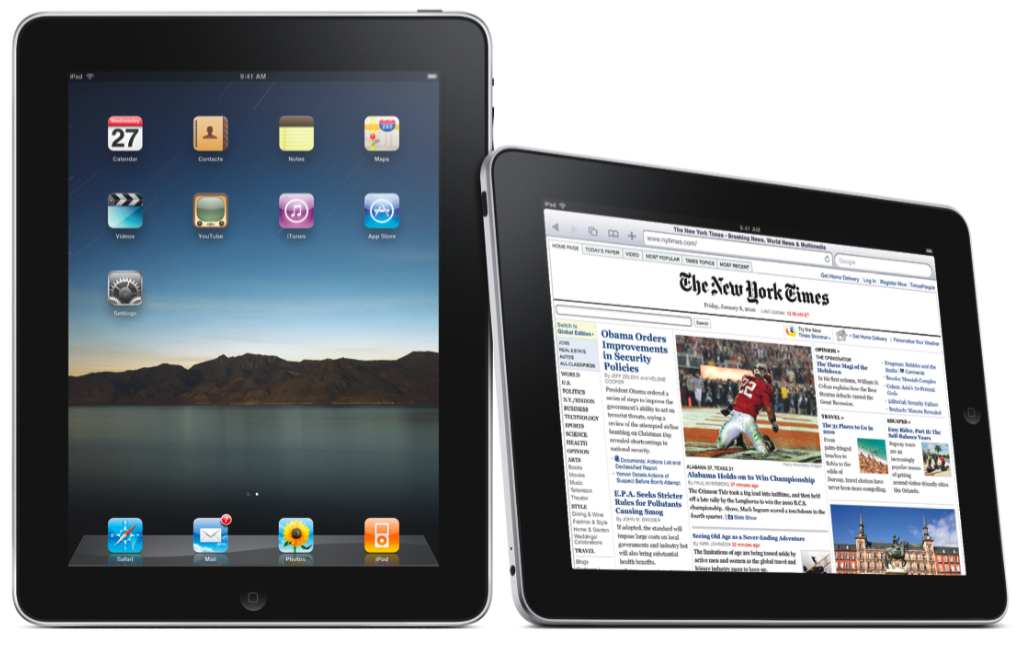 Steve Jobs demos the iPad and delivers a subliminal word to the wise: Focus on the user.

There was nothing really special about the iPod when it launched, either.

There were other MP3 players at the time and people complained about all of the things it didn’t have. And yet it was different. iTunes on the Mac—and later on Windows—is what made it different. Over time the hardware improved a bit and the software improved a lot and the product figured out what it was.

Nine years after the launch of the iPod, Apple CEO Steve Jobs began his January 27th Special Event by noting that one quarter of a billion iPods have been sold. Other than the Classic, the current iPods bear little resemblance to the early models. At the lower end, the shuffle lost its screen and eventually all of its buttons. It’s become so tiny that the controls had to be moved to the wire connecting the headphones. The nano now lets you watch videos on an unbelievably small, well-crafted device. At the top end of the line there’s the iPod Touch, which plays music, videos, and most of the apps from the App store.

As you look at the newly announced iPad, keep in mind the evolution from the iPod to the iPod Touch (which is essentially the iPhone without the phone). Oh, right, the iPhone. Remember all of the things that were wrong with it when it launched? The blogs were filled with laments about the missing features and the terrible choices Apple made. Of course, some of the complaints were valid and needed addressing—and others were a matter of taste.

The biggest miscalculation Apple made was in third-party applications. Apple figured we’d just write web-based applications and they would run in mobile Safari. They prepared consumers for this by introducing the Dashboard and its widgets. Apps on the iPhone would be kind of like widgets.

So Apple thought, but Apple was wrong, and changed its strategy. When Apple exposed its APIs, allowed third party native apps, and created the App store, everything changed. As good as their device was, this was the decision that was most crucial to the success of the iPhone. If Apple had only allowed web-based apps, then those same apps would have worked just as well on Palm or Android. (By the way, it’s probably time for Apple to replace Dashboard on the Mac with an emulation environment that allows you to use appropriate iPhone apps on your laptop.)

So now we have the iPad—or soon will.

Yeah, maybe. But everyone who has touched one says differently. And any developer or Apple competitor who forgets that Apple is utterly focused on the user experience does so at their peril.

Focus on the User

If you’ve watched the video of the “Special Event” there is an initially bizarre portion where Jobs sits on a couch and browses the web on the iPad while we watch. He brings up the New York Times homepage and announces that you can click on a link. Big deal. And then he does. And another. And another. It is the most boring piece of theatre you’ve ever seen. Jobs just sits there browsing the web announcing what he’s going to click on next. It looks exactly the same as the same demo would look if he were browsing the web on a laptop (except for Flash not being supported).

But we’re looking at the wrong thing. We’re looking at the web pages as they come up. Look at that portion of the video again and watch Jobs interacting with the tablet. It’s pure delight. Even browsing the web is different if you are touching the area of the screen you want to select.

I know that that sounds stupid but here was the big aha moment for me on the iPhone. I was in Denver teaching an iPhone studio with Bill Dudney and the two of us went out to dinner with Mike and Nicole Clark, the folks who run the studio. The other three started talking about the app named Flight Control. Bill started up the game and handed it to me, and my relationship to the iPhone completely changed. You touch planes in flight and direct them to their landing pad. This is not the same experience as using a mouse and watching the results on a monitor. The connection to what you are controlling is key.

The developers of the best iPhone apps know this. They ask what is special about the phone and the experience they provide takes advantage of the device. Star Walk knows what time it is, where I am and which direction I’m holding the iPhone in so it can show me the stars I should see when I look in that direction. Magic.

The Intersection of Technology and Liberal Arts

Last night I was up in my office working on my laptop. I had an external screen plugged in so that I could code on one screen and have Interface Builder up on the other. I plugged in an external keyboard and a Wacom tablet. And I noticed that every time I moved my hands from the keyboard to the tablet, I interrupted my flow.

I can think of a ton of applications where I want to have a more intimate connection with what I’m creating. It’s all about the user experience, and we developers are users, too.

For example, suppose I’m sketching a picture. I can use the Wacom tablet and get decent results, but it doesn’t feel as connected as my pencil on paper. But the Brushes app on the iPhone gives me that connection. I’m drawing right here where my finger is. The demo of Brushes on the iPad was natural.

The final slide of Jobs’ presentation showed us at the intersection of Technology and Liberal Arts. I love that intersection. I’ve lived in that neighborhood all my life.

Daniel is the editor for the new series of Mac Developer titles for the Pragmatic Programmers. He writes feature articles for Apple’s ADC web site and is a regular contributor to Mac Devcenter. He has presented at Apple’s Worldwide Developer Conference, MacWorld, MacHack, and other Mac developer conferences. Daniel has produced podcasts for Apple featuring the work of developers and scientists working on the platform. He has coauthored books on Apple’s Bonjour technology as well as on Java Programming and using Extreme Programming in Software Engineering classes. He is the author of Cocoa Programming: A Quick-Start Guide for Developers.