The Camera and the Photograph 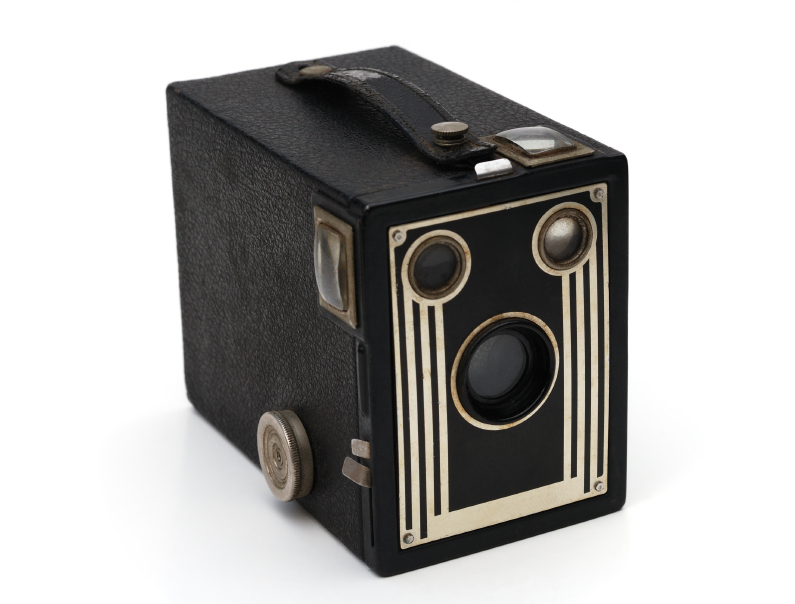 Dan surveys the history of photography in a series of verbal snapshots, and Kodak appears in almost every shot.

On May 8, 1840, Alexander Wolcott received the first US patent for an American camera. Patent number 1582 was awarded for a device that would “take likenesses by means of a concave reflector.” The concave lens was a big improvement over Louis Daguerre’s and Joseph Niepce’s daguerreotype process, which created photos using a copper plate with a silver lining. Although Wolcott’s invention wasn’t the first camera, it was a major landmark in the history of photography—and he does have the distinction of opening the world’s first photography studio in March 1840.

Wolcott called his New York City studio a Daguerrean Parlor. Photographic portraits taken by Wolcott’s camera were very popular even though the pictures were only two inches square. In 1841, Wolcott sold his patent rights to Richard Beard, who opened the first studio in Europe a year later. Wolcott died in 1844, surviving his invention by a scant four years.

With the exception of Daguerre, these photographic innovators’ names may be unfamiliar to you, but I guarantee that the next name won’t be. The first color photograph was produced in 1861 by the scientist who created the electromagnetic theory, Scottish physicist James Clerk Maxwell. Maxwell photographed a tartan ribbon three times using red, blue, and yellow filters before recombining the images into a single color composite.

And then George Eastman released the Kodak camera in 1888. You’ve heard that name, too, and with good reason.

Kodak introduced the one dollar Brownie Camera in February of 1900. The original Brownie Camera was only in production for about two months, but it was quickly followed by the improved Brownie 2. The Franklin Institute says this about the Brownie:

“The Kodak Brownie camera made its debut at the turn of the twentieth century and sold for one dollar. One hundred thousand of them were purchased during the first year alone. The Brownie helped to put photography into the hands of amateurs and allowed the middle class to take their own snapshots as well.... The name Brownie was chosen primarily because of the popularity of a children’s book of cartoons of the same name, and partly because the camera was initially manufactured for Eastman by Frank Brownell of Rochester, New York.”

Over the years, Kodak made the Baby Brownie, the Boy Scout Brownie, the Brownie Bullet and the Brownie Chiquita. The last Brownie, the Fiesta, was discontinued in 1970. On March 14, 1932, George Eastman committed suicide after leaving a note that read, “My work is done. Why wait?”

It was a Kodak researcher, Steven Sasson, who developed the first digital camera in 1975. The Associated Press described it as weighing eight pounds and looking like a toaster. Texas Instruments had designed a filmless but analog-based electronic camera in 1972 but Sasson relied on a new chip called a CCD (charge-coupled device) developed by Fairchild in 1973. A CCD is an image sensor that converts light into the electrons that make photography digital. Unfortunately, it would take the Kodak Company more than 25 years to release a digital camera commercially.

The reason for the delay was economic, not technical—the primary source of Kodak’s profit was film.

Although there seems to be some argument, it is generally accepted that the first digital camera for the consumer market was the Apple QuickTake 100, released in 1994. The QuickTake connected to the Mac by way of the serial port. It was Kodak—who else?—that made the QuickTake 100 for Apple.

From Wolcott’s 2x2 portraits to Apple’s 2x2 digital thumbnails took about one hundred and fifty years. It all started in May 1840—and that’s when it happened.