How to Get Fired Correctly 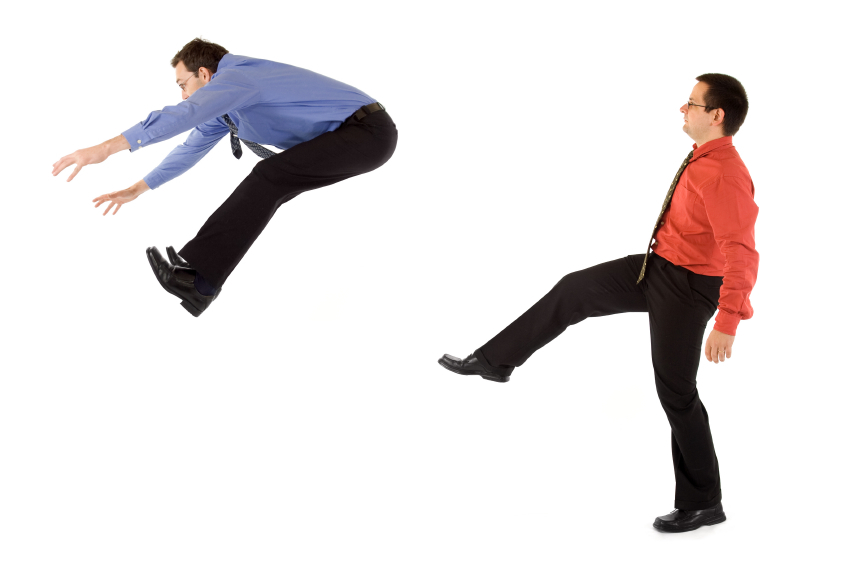 This is your final paycheck, up through today. Security will escort you to your desk to remove your things. There should be boxes there by now for you to use. Your network logins have been disabled. Do you have any questions?

It’s 4:47pm on Thursday, you’re getting ready to go home, and Doug from HR comes to your cube. He says, “I have something important to talk to you about. Please come with me.”  In the HR conference room, your boss, Sarah, is already sitting at the table. On the table is the company policy manual, a printout from the proxy server, a pay envelope with your name on it, and a box of Kleenex in case you cry. Doug’s prepared everything for what’s about to come.

“Have a seat please,” he asks.

Doug starts in, saying, “as you know, Amalgamated Widgets has a strict policy about pornography on company computers. This is policy 17 in the policy handbook, for which you signed a Statement of Agreement on March 3rd, 2008.”  He produces a form with your signature. “Log files from the proxy server indicate that last Wednesday at 9:17 AM you accessed a pornographic website with pornographic images on your computer. This violates company policy and is grounds for dismissal.”

Apparently they would. Doug continues, “Effectively immediately, your employment here is terminated,” handing you the envelope from the table. “This is your final paycheck, up through today. Security will escort you to your desk to remove your things. There should be boxes there by now for you to use. Your network logins have been disabled. Do you have any questions?”

This tale may be an extreme example of career meltdown, made worse by being blindsided, but it’s not far-fetched. No matter the circumstances, getting fired or laid off is traumatic. Planning ahead can make all the difference in how you handle, and come out of, such a scenario.

It Can Happen to You

If you think it can’t happen to you, think again. There is no such thing as job security. In most states, employment is at-will, meaning either the company or employee can terminate the relationship for any reason, or no reason. Every employee is expendable, and can be replaced. If you’ve ever thought, “They can’t fire me because of X,” you’re wrong.

Whether the reason is a layoff, a performance problem, or a bogus reason cooked up because your grandboss doesn’t like you, chances are that at some time in your career, you’re going to get fired or laid off. As you read on, don’t focus on the specifics of the sordid tale of the scenario I presented, but on how to properly handle getting terminated.

The first thing to remember is that at the point where they’ve told you you’re getting fired, you’re fired. There is nothing you can do to stop it from happening. It’s been planned for days, and isn’t taken lightly. If it’s a layoff, it’s been planned for even longer. There is no reversing the course at this point, so don’t make yourself crazy frantically trying to figure out how.

What Not to Do

Back in our story, Doug asked if you have questions, not if you had anything to say in your defense. The following tactics will not help you out, and will only make you look pathetic:

It’s not surprising that these might be the first things to come to mind. Consider the feelings you’re probably going through at that point:

All these feelings are entirely understandable. However, this is no time to act on them. Your emotions will be high, but you need to be calm and professional for the sake of your future career. You can either be remembered well by others, and in the stories that they tell, or you can be the guy who acted like a freak and threatened to call lawyers.

It’s also important, for your own sake, to keep your personal dignity. They’re firing you, but it’s not the end of the world, and it doesn’t mean you’re a terrible person, or a failure at life. People get fired all the time. If it helps, remember that it may have nothing to do with you personally.

So what do you do?  Accept what is happening at the time and go through with being fired, and do it with dignity. If you’re getting fired for cause, rather than being laid off, don’t discuss the reasons. Don’t threaten. Don’t explain.

It’s also important that you keep your options open if they want you to sign papers, especially if you’re fired for cause. Do not sign anything in the heat of getting terminated. Decline politely and say, “I’ll need to review these documents and think about them carefully before signing.”  Take the documents with you, and read them later, preferably the next day. Take them to a lawyer if you’re unsure.

If they make your final paycheck contingent on your signing, say, “I understand, and I’ll get back to you.”  Rest assured that the law is on your side. An employer cannot legally withhold your pay for work you have already done. If they claim the paperwork is “just a formality,” don’t bite. Take them home to be signed later.

Signing anything in that emotional state is never a good idea, and a company may use that fact to its advantage by trying to coerce you into signing something disadvantageous to you. For instance, say you get fired for coming back from lunch smelling like beer. They fire you, and cajole you into signing an “exit form” to get your final paycheck. Turns out that that “exit form” also says that you agree that the company had reason to fire you, and you’ve just signed away a potential wrongful termination suit.

Keep calm, politely decline, and tell them you’ll get back to them. Don’t let them turn their hurry into your hurry. They want to wrap things up while you are stunned. Instead, slow things down in the ways that you can. Buy yourself time to think and to explore your legal options. A hasty decision may bite you later. Be strong and don’t get pressured.

What’s in Your Disaster Planning Kit?

So where do you go after getting fired?  How do you pick up the pieces and move forward?  You need to be prepared for such a scenario. Call it the Working Geek’s Disaster Preparedness Test. Fortunately, it’s useful in good times as well as bad. Tune in next month for details.

Andy Lester has developed software for more than twenty years in the business world and on the Web in the open source community. Years of sifting through résumés, interviewing unprepared candidates, and even some unwise career choices of his own spurred him to write his nontraditional book on the new guidelines for tech job hunting. Andy is an active member of the open source community, and lives in the Chicago area. He blogs at theworkinggeek.com, and can be reached by email at andy@theworkinggeek.com.