It Happened 82 Years Ago This Month 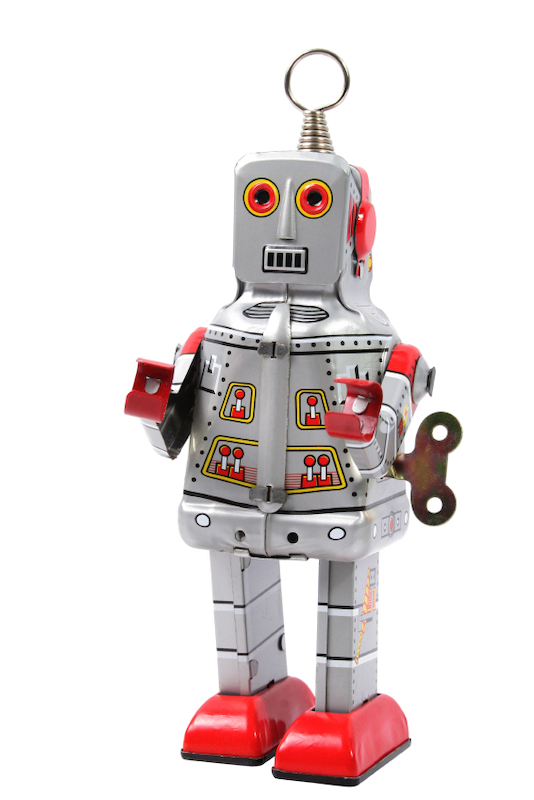 Dan Wohlbruck adds to his series of “When Did That Happen?” essays with the story of the first human-looking robot. He reports, somewhat surprisingly, that “Eric was a simple, successful replacement for the Duke of York.”

On September 20, 1928, Eric, the first human-looking robot, opened the Exhibition of the Society of Model Engineers in London. Captain William Richards, a journalist and WWI veteran, and A. H. Reffell, an engineer, were the inventors. Captain Richards was inspired to build Eric when the Duke of York, who was invited to open the Exhibition, was unable to attend the ceremony. Eric’s presentation is described by the cyberneticzoo.com web site in this way:

“Eric arose, bowed, looked to the right, to the left, and, with appropriate gestures, proceeded to give a four minute opening address.”

Eric was made of aluminum and weighed about 140 pounds. Eric’s movements were powered by small electric motors and his eyes were electric light bulbs. Eric’s voice was sent by wireless radio transmission and broadcast through a speaker in his mouth. Eric couldn’t think and he didn’t have any computational ability. Eric was a simple, successful replacement for the Duke of York.

(Eric can be seen here.)

Eric was not the first human-looking machine ever designed, however. None other than Leonardo da Vinci took up the subject of robots. In 1957, an Italian researcher, looking through da Vinci’s papers, discovered a plan for a mechanical knight. The design included diagrams for gears and motors to power the warrior. In 2002, for a BBC documentary, Leonardo’s robot was actually built.

Following Eric the Robot were a number of other human-looking but not very human-working machines. During World War II, however, serious work was begun to make human replacements. In 1943, Warren McCulloch and Walter Pitts pioneered neural networks. In 1946, George Devol invented a device that controlled machines using magnetic recordings; and in 1948, Norbert Wiener, then at MIT, published the landmark book whose title coined the term Cybernetics. Also in 1948, a little-known inventor named William Grey Walter built two mechanical turtles named Elmer and Elsie that actually looked, moved, and acted like turtles.

In 1956, at a conference in Dartmouth, Marvin Minsky and John McCarthy coined the phrase artificial intelligence to describe robotic thinking machines.

From Elmer and Elsie, we jump ahead to 1961, when the first industrial robot went to work taking die castings and welding auto bodies on the General Motors assembly line. The robotic arm, named Unimate, weighed about 4,000 pounds and executed program instructions stored on a magnetic drum. Unimate was the creation of Devol and Joseph Engelberger, who founded the company Unimation. To the present, Unimate is the most successful of all industrial robots.

By 1973, the focal point of robot development had moved from the UK, through the US, to Japan, where Waseda University demonstrated Wabot-1. Wabot-1 was the first full-scale anthropomorphic robot built in the world. It had separate systems for limb control, vision, and communication. The Wabot-1 spoke Japanese and used artificial ears, eyes, and an artificial mouth. The Wabot-1 walked with legs and gripped with hands that used tactile sensors.

The race was on. In March 1982, Odetics, Inc. of Anaheim, California, introduced the ODEX I and even created a new word to describe the machine: functionoid. ODEX I walked on six legs and weighed less than 400 pounds. Odetics said that ODEX I demonstrated attributes unique to “mobile, nonfactory robotics.” In reporting on the functionoid, Robotics Age magazine wrote, “Odetics intended the first functionoid to be part of a dawning era in the robotics industry in which a multifunctional unit could literally walk away from the factory floor and perform virtually anywhere.”

Not to be outdone, in 1986, Honda introduced the first model of its ASIMO robot. ASIMO is a bit smaller than an average adult, and by 2005 it had 34 degrees of freedom of movement (three in the head, seven in each arm, two in each hand, one in the torso, six in each leg).

Despite being human-looking or even human-acting, the robot achieves the goal of replacing humans only in the movies and in science fiction. In 1940 and 1941, Isaac Asimov began his series of robot novels and short stories. Then, in 1950, he published the book I, Robot, which is a collection of many of his short stories. It is in one of these short stories that Asimov introduced his famous Three Laws of Robotics. Asimov’s books inspired the landmark characters C3P0 and R2D2 from Star Wars.

In Asimov’s book Foundation and Earth, the robot Daneel is found alive on the moon. He has existed for 20,000 years and he admits that he has been gently guiding the progress of the galaxy and abiding by the Laws of Robotics.

The challenge of building machines to replace humans is not over. It began over 80 years ago with Eric the Robot—and that’s when it happened.