The Rise and Fall of the Telegraph 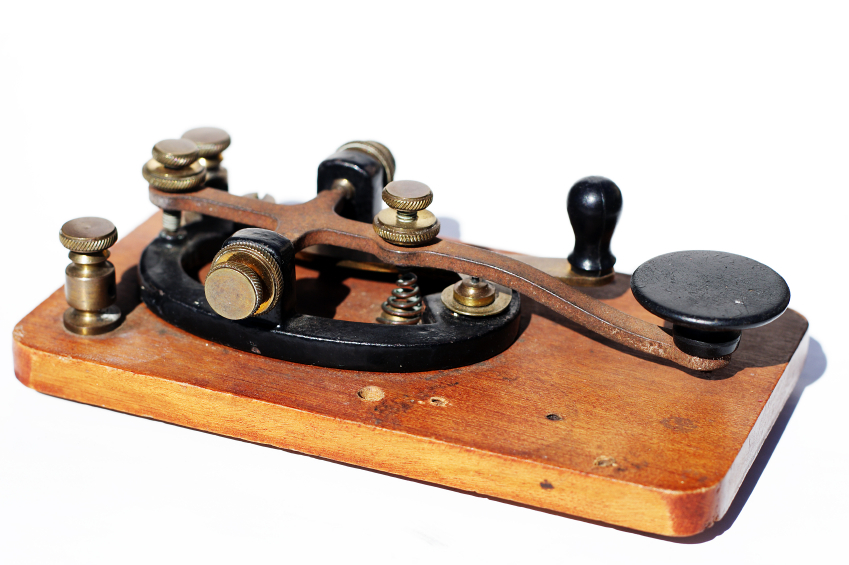 On October 24, 1861, the first transcontinental telegraph line was completed in Salt Lake City, Utah, when the Western Union Company connected the eastern portion of the line with that from the west. After a few messages to test the connection, the first official telegram from Utah to California was sent by Brigham Young, himself. The first coast-to-coast message was sent from the Chief Justice of California (filling in for the Governor) to Abraham Lincoln, and it contained within it a pledge of California’s loyalty to the Union. No doubt a piece of welcome news at the end of a tough year for the President. Electronic messaging began during the 19th century and Western Union and the telegraph were the kings of communication.

The invention that created the electric message was the electromagnet. In 1825, William Sturgeon demonstrated the first electromagnet by lifting nine pounds with a seven-ounce piece of iron. The iron was wrapped with wires through which the electric current of a battery was sent. The potential of the electromagnet for communication was quickly realized by Joseph Henry who, in 1831, sent an electric pulse through a one-mile wire and caused a bell to sound at the remote location.

It was left to Samuel Morse, however, to realize the dream of the telegraph. Morse developed his code and gave practical demonstrations of the telegraph during the late 1830s, and in 1843 the US Congress appropriated $30,000 to build the first long-distance telegraph line from Baltimore to Washington.

It was completed in May, 1844, just in time for the first news to be broadcast electronically.

The Telegraph and Politics

The Whig party, whose convention was in Baltimore, had nominated Henry Clay as its candidate for President and that news was sent to Washington. Morse and his telegraph had greater success than did Clay.

The famous message, “What hath God wrought?” was sent from Washington to Baltimore on May 24, 1844. It was encoded with (what else?) the dots and dashes of Morse code, and marked the official completion of the Baltimore-Washington line.

Although Morse used private funding to extend the line to Philadelphia and Boston, a number of small companies were formed to serve the rural population. In 1855, two smaller organizations merged to form the Western Union Telegraph Company. Western Union went on to absorb other telegraph companies and to dominate the communications industry in the United States. Western Union was one of the original eleven companies in the Dow Jones Transportation Average of 1884.

The completion of the transcontinental telegraph link enabled the railroads to drive the golden spike at the conclusion of coast-to-coast railroad tracks. The telegraph permitted President Lincoln to keep up with his generals, prodding some and firing others, as the Civil War wound on.

The telegraph informed a disbelieving nation of Lincoln’s assassination and Johnson’s impeachment.

The telegraph and the railroad tamed the Western frontier and brought the country together.

Throughout all of this, Western Union prospered. From 1844 until the invention of the telephone in 1877, all electronic messages were sent by telegraph, and most of them by Western Union. The company introduced the stock ticker so that Main Street could keep up with Wall Street, it introduced money transfers and singing telegrams, and it pioneered the use of the teletype.

On June 10, 1871, New York City turned out to honor Samuel Morse with his own statue. At a great celebration held that evening, Morse sent his last telegraph message. From a single telegraph machine sitting on a table in New York, Morse’s keystrokes were sent around the world. In response came congratulatory telegrams from London, Sydney, Hong Kong, New Orleans, and San Francisco. Morse died less than a year later, in 1872.

Western Union tried to remain relevant during the computer revolution of the 20th century. It introduced short-wave networks and it owned the Westar communication satellites, but its profits continued to diminish. By the late 1980s, Western Union had fallen into bankruptcy. On January 27, 2006, Western Union announced that it had sent its last telegram.

It had begun over 180 years ago with electromagnetism and dots and dashes—and that’s when it happened.