The next member of our new Pragmatic Guide Series is here: Pragmatic Guide to Subversion_. Get it while it’s hot from pragprog.com/titles/pgsvn. And it’s hard to believe another month has flown by, but it has, and with the subtle change in weather for September we’ve got the latest issue of PragPub. Free (as in beer) for you to read and share from pragprog.com/magazines. See below for details on this issue.

Save 30% If you bought a copy of Pragmatic Version Control Using Subversion (First or Second edition) in either paperback or ebook directly from pragprog.com, you’ll find a 30% off coupon in your account for the new Pragmatic Guide to Subversion. Enjoy!

Subversion sets the standard in version control systems. Championed by open-source developers, Subversion is behind some of today’s biggest and most important software, including Apache, FreeBSD, Ruby, and MediaWiki. But more than just a tool for open-source collaboration, Subversion has made a significant impact in the corporate IT world. Most developers will now encounter Subversion source control during their career.

As a developer, you probably have knowledge of more than one source control tool and are expected to fluidly switch between tools depending on where you are working. This book was written to bridge the gap between knowing something about version control in general and knowing about Subversion specifically.

In Pragmatic Guide to Subversion, author Mike Mason drives developers to the features and practices that have made Subversion so successful. Each of the 48 tasks selected for the book is presented as a quick two-pager, with a succinct description on the left side and a quick reference on the right. The book is designed for experienced developers who know how to learn and want to get straight to the tricks and traps they’d otherwise learn by trial and error. 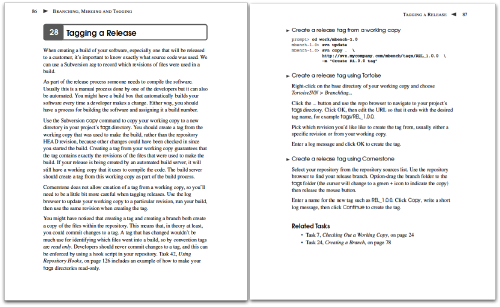 Whether or not you’ve used other version control tools, you’ll learn Subversion’s popular way of working-how to access your source code, make changes, and share them with your team. Each of the development tasks selected for the book gives simple steps toward completion, paired with a clear explanation.

You won’t find a more practical approach to learning Subversion than Pragmatic Guide to Subversion_. Available now in beta in PDF, epub, and mobi formats from pragprog.com/titles/pgsvn, and in print in November.

This month we introduce a new column by Pragmatic Programmer Andy Hunt, titled “Guru Meditations,” in which he points out that context is everything, especially when it comes to introducing agile methods.

For the past year and a half, Jeff Langr and Tim Ottinger have been capturing the wisdom of the Agile community and their own combined 20+ years of Agile and XP experience on index cards. In anticipation of the release of these cards in low-priced decks, they share a few Agile in a Flash cards with you.

When you’re coaching Agile teams, it’s essential to work on building trust from the get-go. Without trust, Agile simply doesn’t work. So Rachel Davies shows how to build trust on your team so that Agile practices can take root.

Brian Tarbox has become convinced that the approach to quality taken by most companies is misguided and based on a flawed model. He explains what he means in a thoughtful essay in this issue.

On September 20, 1928, Eric, the first human-looking robot, opened the Exhibition of the Society of Model Engineers in London. As Dan Wohlbruck reveals, Eric proved to be a simple, successful replacement for the Duke of York.

When John Shade is feeling more than usually insignificant, he reminds himself of two things that give meaning to all our lives: Schrödinger’s cat and anthropogenic global warming. But lately he’s been finding both less comforting than he used to.

This month’s quiz was inspired by Jeff Langr and Tim Ottinger’s article on Agile in a Flash.

And there’s the usual calendar of events and choice bits from the twitterstream.

Thanks for your continued support,