Everyday Scripting with Ruby: for Teams, Testers, and You 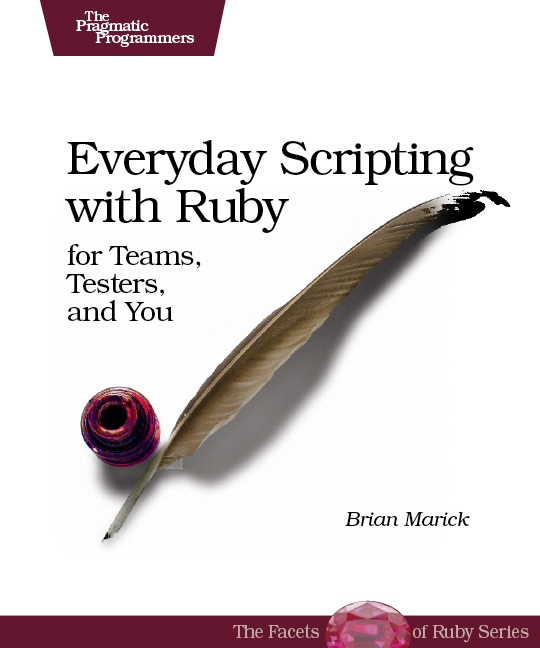 for Teams, Testers, and You

Are you a tester who spends more time manually creating complex test data than using it? A business analyst who seemingly went to college all those years so you can spend your days copying data from reports into spreadsheets? A programmer who can’t finish each day’s task without having to scan through version control system output, looking for the file you want?

If so, you’re wasting that computer on your desk. Offload the drudgery to where it belongs, and free yourself to do what you should be doing: thinking. All you need is a scripting language (free!), this book (cheap!), and the dedication to work through the examples and exercises.

A fantastic type-along-with-me introduction to a powerful scripting language that starts in the shallows and then moves into the depths turning the reader into an accomplished Ruby scripter, almost without them noticing it!

Finally a hands-on book that is filled with gems of wisdom for the testing community.

What a wondrous collection of recipes, guidelines, warnings, comprehensive examples, metaphors, exercises, and questions! It’s a terrific value to software testing practitioners who want to get the most from their test automation effort.

Marick explains the Ruby language using a series of short, practical examples. Watir users and other testers who want to learn Ruby will find it very accessible.

The book is an excellent read, is very informative, and covers a lot of ground in a relatively slim book. I think this is always a good idea. I have a lot of 800+ page tech books that I’ve read about the first half or two thirds of, because they are padded toward the end with very esoteric information. This book held my interest throughout.

…an excellent hands-on tutorial that explains how to use the powerful, object-oriented, open source scripting language of Ruby.

Everyday Scripting with Ruby is divided into four parts. In the first, you’ll learn the basics of the Ruby scripting language. In the second, you’ll see how to create scripts in a steady, controlled way using test-driven design. The third part is about finding, understanding, and using the work of others—and about preparing your scripts for others to use. The fourth part, more advanced, is about saving even more time by using application frameworks.

Throughout, you’ll also see how to cope with common mistakes. You’ll learn how to recognize that you’re in a blind alley and recover from it. You’ll even see examples of the most common typos, so that you’ll recognize the symptoms when you see them.

Brian Marick graduated in 1981 with one degree in Mathematics and Computer Science and another one in English Literature. In his early career, he continued to be confused about his identity. Sometimes he was a programmer. Sometimes he was a tester. He became better at each because he understood the other.

Brian is the author of The Craft of Software Testing, a book about test design techniques for “programming-in-the-medium”. He was an author of the Manifesto for Agile Software Development and was the second chair of the Agile Alliance board of directors. Because the Agile methods encourage cross-disciplinary work, he’s once again without a fixed identity. When consulting, he sticks his nose into everything.