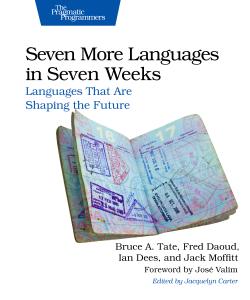 Languages That Are Shaping the Future

Great programmers aren’t born—they’re made. The industry is moving from object-oriented languages to functional languages, and you need to commit to radical improvement. New programming languages arm you with the tools and idioms you need to refine your craft. While other language primers take you through basic installation and “Hello, World,” we aim higher. Each language in Seven More Languages in Seven Weeks will take you on a step-by-step journey through the most important paradigms of our time. You’ll learn seven exciting languages: Lua, Factor, Elixir, Elm, Julia, MiniKanren, and Idris.

Learn from the award-winning programming series that inspired the Elixir language. Hear how other programmers across broadly different communities solve problems important enough to compel language development. Expand your perspective, and learn to solve multicore and distribution problems.

In each language, you’ll solve a non-trivial problem, using the techniques that make that language special. Write a fully functional game in Elm, without a single callback, that compiles to JavaScript so you can deploy it in any browser. Write a logic program in Clojure using a programming model, MiniKanren, that is as powerful as Prolog but much better at interacting with the outside world. Build a distributed program in Elixir with Lisp-style macros, rich Ruby-like syntax, and the richness of the Erlang virtual machine. Build your own object layer in Lua, a statistical program in Julia, a proof in code with Idris, and a quiz game in Factor.

When you’re done, you’ll have written programs in five different programming paradigms that were written on three different continents. You’ll have explored four languages on the leading edge, invented in the past five years, and three more radically different languages, each with something significant to teach you.

With each passing day, it is becoming more likely that new programmers will use functional programming, an entirely new programming paradigm. Each of the new languages has something unique to teach the next generation of programmers.

Programmers who want to improve themselves are learning functional programming in increasing numbers. Factor is a great language for learning about the composition of functions. The concatenative language forces new users to think through how functions will work together.

2. If you want to learn JavaScript, learn how prototypes work first in a simpler language.

New JavaScript programmers are often better off learning a language like Lua first, which has the same overall model but fewer distracting concepts than JavaScript.

3. You don’t need callbacks to build a beautiful user interface.

Reactive programming is a new style of user interface development that helps build highly interactive and reliable applications. The Elm programming language is a language with reactive concepts baked in, from the inside out, and it compiles to JavaScript.

Applications are becoming more distributed than ever before. Elixir is among the most promising young languages for building cloud applications that scale well and handle failure in a sensible, reliable way. Elixir combines the natural syntax of Ruby with Clojure-style macros, all on the Erlang virtual machine for distribution and failover.

5. Technical computing will hit the limitations of multicore architectures before most other programming branches will.

6. Use logic programming when you need to build applications that “think."

You don’t need to know Mercury or Prolog to write logic programs. If you find yourself needing to occasionally solve logic problems, use a library instead. MiniKanren is one such library that is available in languages like Haskell and Clojure.

7. You don’t need to use Haskell, Agda or Idris to take advantage of advanced type theory in your everyday job.

Sometimes, it’s hard to see the forest for the trees. Languages like Idris are excellent for reasoning about typing. You can build a type model in Idris and adapt it to a language like C++.

Bruce Tate, CTO of icanmaketibetter.com, is a mountain biker, climber, and father of two from Austin, Texas. He is the author of more than ten books, including Seven Languages in Seven Weeks, and is the series editor of the Seven in Seven series.

By day, Erin Dees slings code, tests, and puns at a Portland-area test equipment manufacturer. By night, she converts espresso into programming books, including Cucumber Recipes. Erin tweets as @undees.

Jack Moffitt falls in love with languages easily. He is a senior research engineer at Mozilla Research and works on Servo, an experimental browser engine written in Mozilla’s new Rust language.