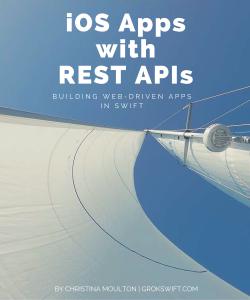 You need to build an iOS app around your team’s API, or integrate a third party API. You need a quick, clear guide to demystify Xcode and Swift. No esoteric details or mathematical analysis of <code>{=html}flatMap</code>{=html}. Only the nitty gritty to get real work done now: pulling data from your web services into an iOS app, without tossing your MacBook or Mac Mini through a window. Just the bare facts to get CRUD done on iOS. That’s what this book will do for you.

After reading this book you’ll be able to:

To achieve those goals we’ll build out an app based on the GitHub API, focusing on gists. Your model objects might be bus routes, customers, chat messages, or whatever kind of object is core to your app.

This book is for:

This book isn’t for:

1. From JSON API to Swift App

5. Hooking Up a REST API to a Table View

12. Integrating OAuth with the UI

17. Creating Gists and Clearing the Cache

Appendix: A Brief Introduction to CocoaPods

Christina Moulton has been developing iOS apps for five years and still randomly types <code>{=html}retain];</code>{=html} once in a while. She develops custom iPhone and iPad apps at Teak Mobile Inc. in Ontario, Canada. She writes Swift developer tutorials at GrokSwift.com as often as she can.