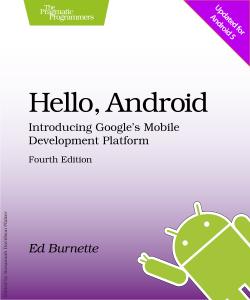 Google Android dominates the mobile market, and by targeting Android, your apps can run on most of the phones and tablets in the world. This new fourth edition of the #1 book for learning Android covers all modern Android versions from Android 4.1 through Android 5.0. Freshly added material covers new Android features such as Fragments and Google Play Services. Android is a platform you can’t afford not to learn, and this book gets you started.

Android is a software toolkit for mobile phones and tablets, created by Google. It’s inside more than a billion devices, making Android the number one platform for application developers. Your own app could be running on all those devices!

Getting started developing with Android is easy. You don’t even need access to an Android phone, just a computer where you can install the Android SDK and the emulator that comes with it. Within minutes, Hello, Android
gets you creating your first working application: Android’s version of “Hello, World.” From there, you’ll build up a more substantial example: an Ultimate Tic-Tac-Toe game. By gradually adding features to the game, you’ll learn about many aspects of Android programming, such as creating animated user interfaces, playing music and sound effects, building location-based services (including GPS and cell-tower triangulation), and accessing web services. You’ll also learn how to publish your applications to the Google Play Store.

This fourth edition of the bestselling Android classic has been revised for Android 4.1-4.3 (Jelly Bean), 4.4 (KitKat), and Android 5.0 (Lollipop). Topics have been streamlined and simplified based on reader feedback, and every page and example has been reviewed and updated for compatibility with the latest versions of Android.

If you’d rather be coding than reading about coding, this book is for you.

1. Use Android Studio. Android Studio has replaced Eclipse as the go-to IDE for Android development. It features increased speed and stability, native support for gradle builds, and a fanstastic user interface editor.

2. Understand the Activity and Fragment lifecycle. Android development is not like development for desktop applications. The system controls when your app is launched, paused, resumed, and terminated. It calls methods you write, such as onStart(), to tell you what is about to happen. Your job is to play nicely with the system and be a good Android app citizen. Your users will thank you!

5. Remember, logging is your friend. Sure, IDEs like Android Studio come with a fancy debugger, and you’ll have to use that from time to time. But often, simpler is better. A few well-placed messages in the Android log can help you diagnose problems quickly, even hard to reproduce ones.

You just need a computer to get started. The book explains how to download Java and Android Studio.

Ed Burnette is a software industry veteran with more than 30 years of experience as a programmer, author, and analyst. He is a founding member and senior researcher at the SAS Advanced Server Research group, and is the creator of Planet Android. Ed has authored numerous technical articles and books, including Google Web Toolkit: Taking the Pain out of Ajax and Eclipse IDE Pocket Guide. In his copious spare time, you can often find him playing video games with his two sons at their home in central North Carolina.