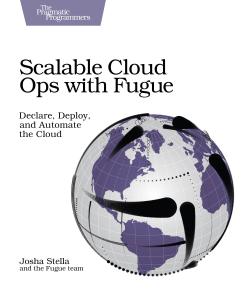 Declare, Deploy, and Automate the Cloud

by Josha Stella and the Fugue team

Harness the promise of the cloud with Fugue, an operating system built for the cloud. Program cloud infrastructure in a fraction of the time it takes with current tools, debug infrastructure at design time, and centralize your change control process. Written by the Fugue development team, this is the definitive resource to scalable cloud operations with Fugue.

Cloud computing represents the greatest shift in computing in more than a decade. But the promise of the cloud is unrealized. The cloud isn’t just about shedding the physical data center—it’s about shedding the data center mindset. Cloud infrastructure can be controlled via API calls. This means we can view it as a giant general-purpose computer—and program it. That’s where the Fugue operating system and the Ludwig language come in. They automate the creation, operation, enforcement, and termination of infrastructure in the cloud.

This definitive Fugue guide starts with a simple website and moves on to a more robust application with evolving infrastructure needs as you walk through the steps to harnessing the cloud. With Amazon Web Services, launch infrastructure quickly. Debug in design time. Automate deployment and enforcement of your cloud. Centralize your change control process and automate continuous auditing. Rest easy knowing configuration drift, unwanted changes, and infrastructure quality issues are addressed, continuously and automatically. Hands-on chapters lead you through creating this application step by step.

If you’re a software engineer, architect, DevOps professional, or enterprise team leader using cloud computing for running applications and websites, this book will change the way you view cloud computing.

An Amazon Web Services (AWS) account and a basic familiarity with the AWS Console.