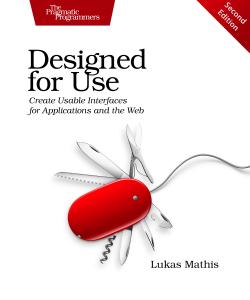 Designed for Use, Second Edition

Create Usable Interfaces for Applications and the Web

This book is for designers, developers, and product managers who are charged with what sometimes seems like an impossible task: making sure products work the way your users expect them to. You’ll find out how to design applications and websites that people will not only use, but will absolutely love. The second edition brings the book up to date and expands it with three completely new chapters.

Interaction design—the way the apps on our phones work, the way we enter a destination into our car’s GPS—is becoming more and more important. Identify and fix bad software design by making usability the cornerstone of your design process.

Lukas weaves together hands-on techniques and fundamental concepts. Each technique chapter explains a specific approach you can use to make your product more user friendly, such as storyboarding, usability tests, and paper prototyping. Idea chapters are concept-based: how to write usable text, how realistic your designs should look, when to use animations. This new edition is updated and expanded with new chapters covering requirements gathering, how the design of data structures influences the user interface, and how to do design work as a team. Through copious illustrations and supporting psychological research, expert developer and user interface designer Lukas Mathis gives you a deep dive into research, design, and implementation—the essential stages in designing usable interfaces for applications and websites.

Lukas inspires you to look at design in a whole new way, explaining exactly what to look for—and what to avoid—in creating products that get people excited.

Design with an Open Mind by Lukas Mathis

Here are six rules for keeping your mind open and productive when designing software.

Don’t Pick Sides:
In design meetings, somebody commonly proposes a solution to a design problem, and somebody else disagrees, offering an alternative approach. The human tendency toward tribalism quickly kicks in, and the other people in the meeting align themselves with either of the two ideas. At this point, people are no longer designing but rather arguing about which of two proposed solutions is the correct one. But interaction design is such a young field that there is no correct solution to design problems.

Don’t Accept False Dichotomies:
When somebody proposes a specific solution in a design meeting, people automatically fall into a mode where they’re arguing for or against this solution, instead of trying to build on the proposed solution and evolve it, or trying to come up with an entirely new approach. It’s important to identify these situations, stop the pro and con talk, and guide the discussion back to a more productive approach, where people are trying to solve design problems instead of arguing about which of two suggestions is “correct.”

Don’t Commit Too Early:
Don’t think that your first, second, third, and fourth ideas are the best ones you can come up with. Try to generate as many ideas as possible without judging each individual idea too much (even a bad idea could be the impetus for a better one). There’s plenty of research on this topic, and it always comes to the conclusion that focusing on having better ideas doesn’t work; all ideas have an equal chance of being good. This means that to generate more good ideas, all you have to do is generate more ideas, period. Don’t stop coming up with new ideas early. The longer you stay in the idea-generation phase, the more good ideas you’ll come up with.

Break Conventions:
Good design is design that works. This seems like an obvious point, and yet people often confuse good design with design that follows its host system’s UI guidelines, or design that is consistent with other, similar products, or design that follows some other convention. When in doubt, following conventions is a good idea. Conventions are there for a reason. Google invested a lot in its material design spec, for example, and you could do a lot worse than follow its lead. But it’s possible that you could also do a lot better. If you think that following conventions makes your product harder to use, more difficult to learn, or less efficient to use, you should challenge these conventions. Find the best solution for the users’ needs.

Revisit Your Early Ideas:
After you’ve invested a lot of time and effort into creating a better design, and after you’ve gone through a lengthy design process, you might feel that the resulting design must be your obvious best choice. After all, you’ve spent so much time and money coming up with it, it would be a waste not to pick it! That’s called the sunk cost fallacy. It’s a fallacy because you’re making decisions based on the time and money you’ve invested in a design and not based on the design’s actual merits. More isn’t always better. Having spent all of that time, your understanding of the problem will have improved, and that will help you make the right decision.

You Can Always Do Better:
The design work Google or Apple produce often looks incredibly polished and final. But in a few decades, we’ll look back on current UI design the way we look back on early steam engines—-as archaic and primitive. Interaction design is such a young field that anyone can contribute, and nobody should be afraid of trying to improve things that seem like accepted wisdom. We can do much better. You can do much better.

(There are no requirements)

Lukas Mathis is the Frontend Lead at Swiss software company Appway, the leader in client onboarding for the financial services industry. His blog on design and usability at ignorethecode.net is read by tens of thousands of people each month, and his essays on design have been published on sites such as UX Magazine and Splashnology. He has created a number of online tools for UI design.