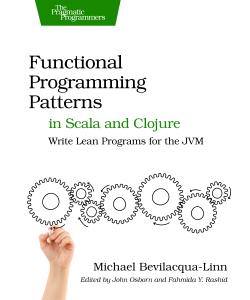 Write Lean Programs for the JVM

Solve real-life programming problems with a fraction of the code that pure object-oriented programming requires. Use Scala and Clojure to solve in-depth problems and see how familiar object-oriented patterns can become more concise with functional programming and patterns. Your code will be more declarative, with fewer bugs and lower maintenance costs.

Functional languages have their own patterns that enable you to solve problems with less code than object-oriented programming alone. This book introduces you, the experienced Java programmer, to Scala and Clojure: practical, production-quality languages that run on the JVM and interoperate with existing Java. By using both the statically typed, type-inferred Scala and the dynamically typed, modern Lisp Clojure, you’ll gain a broad understanding of functional programming.

Each pattern helps you solve a common programming problem. Working through them gives you a set of patterns you can use to solve problems you come across while writing programs. Finally, you’ll learn how to work your existing Java code into new Scala or Clojure projects. You can start off small, adding functional code little by little, so you can complement your existing knowledge with Scala and Clojure as these languages gain popularity on the JVM.

Q&A with Michael Bevilacqua-Linn, author of Functional Programming Patterns in Scala and Clojure

Why did you write Functional Programming Patterns?
Languages with a functional flavor are getting more and more mainstream, and I wanted to write something that would help folks with a lot of traditional OO pattern knowledge start to make the transition.

I don’t know Scala or Clojure. How hard would it be for me to understand the examples in the book?
This book is written for programmers who are new to Scala and Clojure, but who have significant experience with Java and object-oriented patterns.  One of its goals is to help ease experienced object-oriented programmers into a more functional style.

What can I do with functional patterns I couldn’t do before?
It’s not so much what you can do, as what you can do better!  Functional programming, and the patterns that go along with it, tends to be more declarative than imperative programming, so you can solve problems with code that’s both more straightforward and shorter.  The functional focus on immutable data reduces bugs in large programs, especially ones involving concurrency.

Which one should I use? Scala or Clojure? What are the differences and which would be easier to start with?
Scala tends to provide an easier on-ramp for object-oriented programmers, as they can start working with it in a mainly object-oriented style and transition to a more functional style as they gain more experience.  Scala also has a sophisticated static type system, and blends object-oriented and functional programming together.  Clojure, on the other hand, is a modern, practical Lisp and comes with the powerful macro system inherent to Lisps.

Both are excellent, general-purpose languages, but I have to confess that I prefer Clojure.  I find that I can write clear, concise code it in much more easily than I can in any other language.  However, knowing both will give you a very broad understanding of modern languages with a functional flavor.

5 tips when you dive into the functional programming world

Tip 2: Don’t be afraid to create functions that return functions.

Tip 4: Reach for higher order functions over collections before recursion.

How This Book Is Organized

Why Scala and Clojure

How To Read This Book

Michael Bevilacqua-Linn has been programming computers ever since he dragged an Apple IIGS into his fifth grade class to explain loops and variables to pre-teenagers. He works for Comcast, where he builds distributed systems that power infrastructure for their next generation services. In his spare time he likes rock climbing and good beer, though not at the same time. He blogs at mblinn.com.