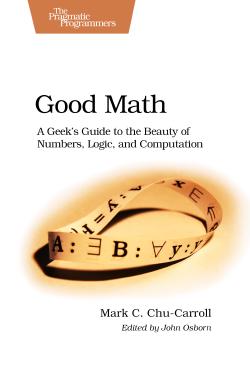 A Geek's Guide to the Beauty of Numbers, Logic, and Computation

Mathematics is beautiful—and it can be fun and exciting as well as practical. Good Math is your guide to some of the most intriguing topics from two thousand years of mathematics: from Egyptian fractions to Turing machines; from the real meaning of numbers to proof trees, group symmetry, and mechanical computation. If you’ve ever wondered what lay beyond the proofs you struggled to complete in high school geometry, or what limits the capabilities of the computer on your desk, this is the book for you.

Why do Roman numerals persist? How do we know that some infinities are larger than others? And how can we know for certain a program will ever finish? In this fast-paced tour of modern and not-so-modern math, computer scientist Mark Chu-Carroll explores some of the greatest breakthroughs and disappointments of more than two thousand years of mathematical thought. There is joy and beauty in mathematics, and in more than two dozen essays drawn from his popular “Good Math” blog, you’ll find concepts, proofs, and examples that are often surprising, counterintuitive, or just plain weird.

Mark begins his journey with the basics of numbers, with an entertaining trip through the integers and the natural, rational, irrational, and transcendental numbers. The voyage continues with a look at some of the oddest numbers in mathematics, including zero, the golden ratio, imaginary numbers, Roman numerals, and Egyptian and continuing fractions. After a deep dive into modern logic, including an introduction to linear logic and the logic-savvy Prolog language, the trip concludes with a tour of modern set theory and the advances and paradoxes of modern mechanical computing.

If your high school or college math courses left you grasping for the inner meaning behind the numbers, Mark’s book will both entertain and enlighten you.

No special equipment or software is required. Although the book contains brief code examples, they can all be run with open source software on any up-to-date Apple, Windows, or Linux computer.

Mark Chu-Carroll is a PhD computer scientist and professional software engineer. His professional interests include collaborative software development, programming languages and tools, and how to improve the daily lives of software developers. Aside from general geekery and blogging, he plays classical music on the clarinet, traditional Irish music on the wooden flute, and folds elaborate structures out of paper.