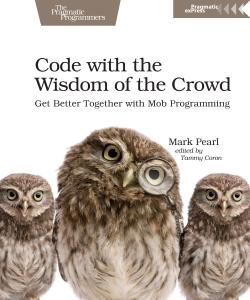 Code with the Wisdom of the Crowd

Get Better Together with Mob Programming

Build systems faster and more effectively with Mob Programming. Mob Programming is an approach to developing software that radically reduces defects and key-person dependencies by having a group of people work together at a single machine. See how to avoid the most common pitfalls that teams make when first starting out. Discover what it takes to create and support a successful mob. Take collaborative programming to the next level!

Mob Programming is a natural extension of the popular Pair Programming concept and is not restricted to a specific programming language or technology. It can be used by anyone who develops software, including dev leads, software developers, and agile coaches. When you have more people working on a bug or feature, you get fewer dependencies on individuals and overall increased learning for everyone involved. With more eyes on the code, you’ll find you develop better solutions with fewer defects.

Set up your team for success by introducing Mob Programming in a way that benefits them. Create a good first Mobbing experience for your team with a template that avoids the common traps beginners may fall into. Master a collaborative and empathic mindset to help optimize the Mobbing experience. Learn how to make adjustments when things go wrong. Adapt your mobbing to different types of development tasks. Get management buy-in for your Mobbing experiment by demonstrating the benefits. Discover the equipment and resources you need and how to adjust your workspace for an effective mob.

All you need is three or more programmers, a meeting workspace that’s large enough to accommodate your mob, and a computer on which to work.

Mark Pearl has been developing software professionally for over 15 years. He is an active participant in the Mob Programming community since 2015 and has helped teams all over the world adopt Mob Programming with exceptional results.