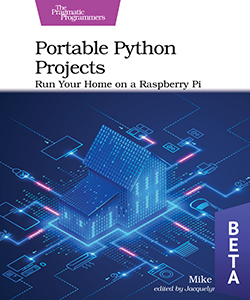 Run Your Home on a Raspberry Pi

Discover easy ways to control your home with the powerful new Raspberry Pi hardware. Program short Python scripts that will detect changes in your home and react with the instructions you code. Use new add-on accessories to monitor a variety of measurements, from light intensity and temperature to motion detection and water leakage. Expand the base projects with your own custom additions to perfectly match your own home setup. Most projects in the book can be completed in under an hour, giving you more time to enjoy and tweak your autonomous creations. No breadboard or electronics knowledge required!

This book is in Beta, final version expected Nov 2021

Get to know the latest Raspberry Pi hardware, and create awesome automation solutions for home or work that don’t require an electronics degree, cumbersome add-ons, or expensive third-party subscription services. Create easy to run Python scripts on your own that make your Pi do things that would have required a team of automation experts to build only a few years ago.

Connect to and control popular home automation lighting systems from a Raspberry Pi. Trigger autonomous actions based on movement, temperature, and timer events. Power on your own computer and appliances using your voice. Remotely control infrared-enabled consumer electronics, create chatbots to retrieve personalized items of interest, and implement a temperature-monitoring room fan. These are just some of the projects that the book will show you how to make. Most projects can be completed and operational in under an hour, and do not require any messy schematics or a spaghetti bowl of wires and breadboard-attached circuits to operate.

Control your home or office exactly the way you want instead of relying on an expensive mysterious box of third-party technology to do it for you.

Mike Riley is the author of several titles published by Pragmatic Bookshelf, as well as a member of the company’s Technical Advisory Board. He has been tinkering with computers since the late 70’s beginning with the Tandy TRS-80, and has been a lifelong adventurer in science and technology.

This book is in Beta, final version expected Nov 2021