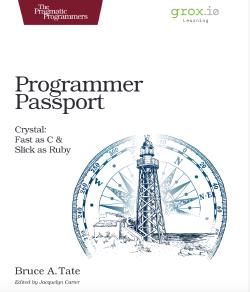 Fast as C & Slick as Ruby

Twenty years ago in The Pragmatic Programmer, my friend and business partner Andy Hunt and my longtime mentor Dave Thomas charged us with learning a new language every year. I took that advice and never gave up the habit. In this series we’ll learn languages together because doing so will make us better programmers. I strongly believe learning even obscure languages teaches common patterns that can be applied in your day-to-day job.

Programmer Passport: Crystal introduces Crystal, the language that’s built to do many of the things C can do but with the friendliness of Ruby. Based on rapid adoption within the Ruby community, it’s a quickly growing language, and it has an impressive list of strengths, including some nice feature groupings you don’t usually find together in the same language.

Crystal was initially designed to be a drop-in replacement for Ruby, but one with a type system friendlier to compile-time checking, tooling and compilers. As the language has grown it has dropped complete compatibility with Ruby to better support the goals of the type system. Still, Crystal and Ruby syntax are remarkably similar. This book looks at what makes Crystal special.