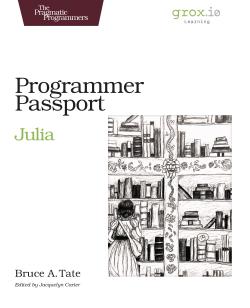 The Julia programming language is one of the fastest growing languages in the world. As data science and machine learning become more popular, Julia’s blend of high performance and general purpose features have rapidly driven its adoption by such companies as Apple and Disney. With Grox.io as a guide, you can explore with us and find out why.

Throughout the Julia language, you can see powerful features supporting productivity, performance, and friendly features for scientists. Advanced concurrency features allow a higher level of parallelism than most other technical languages support. A rich type system provides the extra performance, documentation, and protection when you want it. Multiple dispatch allows the high levels of reuse that object-oriented languages promised but never seemed to deliver.

What really sets Julia apart is the libraries. With high-performance libraries available for everything from machine learning to data manipulation, the Julia language shines where many other functional languages fail. In this Groxio course, you’ll learn to use Julia to crunch numbers, then share the models you’ve built via a web service.