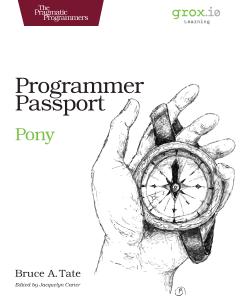 Twenty years ago in The Pragmatic Programmer, my friend and business partner Andy Hunt and my longtime mentor Dave Thomas charged us with learning a new language every year. I took that advice and never gave up the habit. In this series we’ll learn languages together because doing so will make us better programmers. I strongly believe learning even obscure languages teaches common patterns that can be applied in your day-to-day job.

As we explore Pony together, you’re going to see a huge splash of new ideas, especially the concept of reference capabilities, an idea that allows Pony to check concurrency correctness in the compiler. Here’s how the Pony web site describes the new language: Pony is an open-source, object-oriented, actor-model, capabilities-secure, high- performance programming language.

This list might already pique your curiosity. The takes on OOP and capabilities make it pretty much fully unique among programming languages you see today. I’ll add that Pony is strongly typed with a tremendous emphasis on fully eliminating runtime errors, deadlocks, and data races.