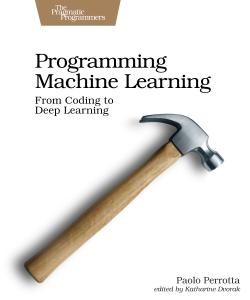 From Coding to Deep Learning

You’ve decided to tackle machine learning — because you’re job hunting, embarking on a new project, or just think self-driving cars are cool. But where to start? It’s easy to be intimidated, even as a software developer. The good news is that it doesn’t have to be that hard. Master machine learning by writing code one line at a time, from simple learning programs all the way to a true deep learning system. Tackle the hard topics by breaking them down so they’re easier to understand, and build your confidence by getting your hands dirty.

Peel away the obscurities of machine learning, starting from scratch and going all the way to deep learning. Machine learning can be intimidating, with its reliance on math and algorithms that most programmers don’t encounter in their regular work. Take a hands-on approach, writing the Python code yourself, without any libraries to obscure what’s really going on. Iterate on your design, and add layers of complexity as you go.

Build an image recognition application from scratch with supervised learning. Predict the future with linear regression. Dive into gradient descent, a fundamental algorithm that drives most of machine learning. Create perceptrons to classify data. Build neural networks to tackle more complex and sophisticated data sets. Train and refine those networks with backpropagation and batching. Layer the neural networks, eliminate overfitting, and add convolution to transform your neural network into a true deep learning system.

Start from the beginning and code your way to machine learning mastery.

The examples in this book are written in Python, but don’t worry if you don’t know this language: you’ll pick up all the Python you need very quickly. Apart from that, you’ll only need your computer, and your code-adept brain.

Paolo Perrotta is a traveling software mentor. He wrote “Metaprogramming Ruby” for the Pragmatic Programmers, and produced the popular “How Git Works” training for Pluralsight. He speaks a lot — at conferences and, according to his friends and family, pretty much anywhere else.