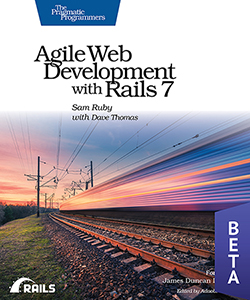 Rails 7 completely redefines what it means to produce fantastic user experiences and provides a way to achieve all the benefits of single-page applications - at a fraction of the complexity. Rails 7 integrates the Hotwire frameworks of Stimulus and Turbo directly as the new defaults, together with that hot newness of import maps. The result is a toolkit so powerful that it allows a single individual to create modern applications upon which they can build a competitive business. The way it used to be.

This book is in Beta, final version expected Apr 2023

Ruby on Rails helps you produce high-quality, beautiful-looking web applications quickly—you concentrate on creating the application, and Rails takes care of the details. Rails 7 brings many improvements, and this edition is updated to cover the new features and changes in best practices.

We start with a step-by-step walkthrough of building a real application, and in-depth chapters look at the built-in Rails features. Follow along with an extended tutorial as you write a web-based store application. Eliminate tedious configuration and housekeeping, seamlessly incorporate JavaScript, send and receive emails, manage background jobs with ActiveJob, and build real-time features using WebSockets and ActionCable. Test your applications as you write them using the built-in unit, integration, and system testing frameworks, internationalize your applications, and deploy your applications easily and securely.

Sam Ruby is a member of the Board of Directors of the Apache Software Foundation, previously co-chaired the W3C HTML Working Group, and has made significant contributions to many open source projects and standards.

This book is in Beta, final version expected Apr 2023