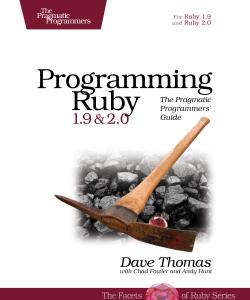 Ruby is the fastest growing and most exciting dynamic language out there. If you need to get working programs delivered fast, you should add Ruby to your toolbox.

This book is the only complete reference for both Ruby 1.9 and Ruby 2.0, the very latest version of Ruby.

Would you like to go from first idea to working code much, much faster? Do you currently spend more time satisfying the compiler instead of your clients or end users? Are you frustrated with demanding languages that seem to get in your way, instead of getting the work done? Are you using Rails, and want to dig deeper into the underlying Ruby language? If so, then we’ve got a language and book for you!

This is the reference manual for Ruby, including a description of all the standard library modules, a complete reference to all built-in classes and modules (including all the new and changed methods introduced by Ruby 1.9, 1.9.2, 1.9.3, and 2.0¹). It also includes all the new and changed syntax and semantics introduced since Ruby 1.8. Learn about the new parameter passing rules, local variable scoping in blocks, fibers, and the new block declaration syntax, among other exciting new features.

The major language changes in Ruby 2.0 are the addition of keyword arguments and the change to use UTF-8 as the default source file encoding.

There are a number of additions to the standard library, including:

You’ll also find that Ruby 2 is faster, and has memory management improvements that make it more server-friendly.

All told, there are over 110 sections of the book that have been flagged and cross-linked to indicate 2.0 content.

Ruby is the language of choice in <a href="http://www.amazon.com/Mr-Penumbras-24-Hour-Bookstore-Novel/dp/1250037751">{=html}Mr. Penumbra’s 24-Hour Bookstore</a>{=html}, a fun novel about books, Google, and a somewhat flakey secret society.

Want to learn how to write object-oriented Ruby programs interactively through engaging videos and hands-on exercises? Check out The Pragmatic Studio’s <a href="http://pragmaticstudio.com/ruby">{=html}online Ruby Programming course</a>{=html}.

In this online, self-paced course, you’ll learn all the fundamentals of the Ruby programming language, and how to design good programs using object-oriented techniques and principles. And if building web apps with Rails is your goal, this course will give you more confidence as a Rails programmer.

To learn more about this course, watch the introduction video below:

“The course is outstanding! The best I’ve ever taken. Rails is so much less mysterious now that I’m learning Ruby the right way.” — Tony Barone