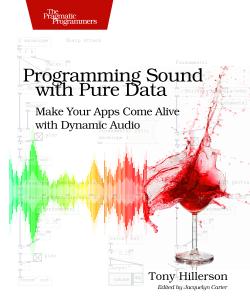 Sound gives your native, web, or mobile apps that extra dimension, and it’s essential for games. Rather than using canned samples from a sample library, learn how to build sounds from the ground up and produce them for web projects using the Pure Data programming language. Even better, you’ll be able to integrate dynamic sound environments into your native apps or games—sound that reacts to the app, instead of sounding the same every time. Start your journey as a sound designer, and get the power to craft the sound you put into your digital experiences.

Add sound effects or music to your web, Android, and iOS apps and games—sound that can react to changing environments or user input dynamically (at least in the native apps). You can do all this with Pure Data, a visual programming language for digital sound processing.

Programming Sound with Pure Data introduces and explores Pure Data, building understanding of sound design concepts along the way. You’ll start by learning Pure Data fundamentals and applying them, creating realistic sound effects. Then you’ll see how to analyze sound and re-create what you hear in a recorded sample. You’ll apply multiple synthesis methods to sound design problems. You’ll finish with two chapters of real-world projects, one for the web, and one for an iOS and Android app. You’ll design the sound, build the app, and integrate effects using the libpd library.

Whether you’ve had some experience with sound synthesis, or are new to sound design, this book is for you. These techniques are perfect for independent developers, small shops specializing in apps or games, and developers interested in exploring musical apps.

You’ll need a computer with a sound card and some headphones, Pure Data or Pd-extended 0.43 or greater, your favorite code editor, and Eclipse and/or Xcode for the native projects.

Who Is This Book For?

What This Book Covers

What This Book Doesn’t Cover

Where Will You Be When You Finish This Book?

Getting Started With Sound Design

Tony Hillerson is a partner and mobile developer at Tack Mobile. He’s designed sound and composed music for Tack’s games and apps. Tony has also spoken at RailsConf, AnDevCon, 360|iDev, and has created popular Android screencasts. In his free time Tony plays the bass, Warr Guitar, and makes electronic music.