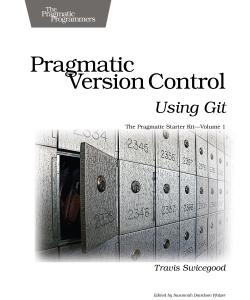 There’s a change in the air. High-profile projects such as the Linux Kernel, Mozilla, Gnome, and Ruby
on Rails are now using Distributed Version Control Systems (DVCS) instead of the old stand-bys of CVS or Subversion.

Git is a modern, fast DVCS. But understanding how it fits into your
development can be a daunting task without an introduction to the new
concepts. Whether you’re just starting out as a professional programmer
or are an old hand, this book will get you started using Git in this new
distributed world.

Whether you’re making the switch from a traditional centralized version control system or are a new programmer just getting started, this book prepares you to start using Git in your everyday programming.

Pragmatic Version Control Using Git starts with an overview of version control systems, and shows how being distributed enables you to work more efficiently in our increasingly mobile society. It then progresses through the basics necessary to get started using Git.

You’ll get a thorough overview of how to take advantage of Git. By the time you finish this book you’ll have a firm grounding in how to use Git, both by yourself and as part of a team.

Travis Swicegood is part of the AppDev team at Ning helping to build the platform that lets you create a social network. He’s been programming professionally for nearly a decade, but would still be doing it for fun even if he was selling cars for a living.

He is actively involved in the development of several open-source automation tools in the PHP community, including several testing frameworks. He is also an active member of his local programming community, founding Lawrence Programmers. When not learning new programming languages or tools, he’s normally found on one of his many bikes, tasting his latest culinary creation, or experimenting with a new home brew.