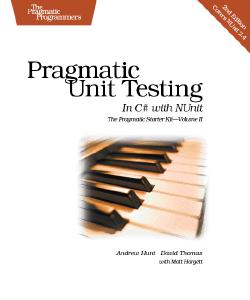 by Andy Hunt and Dave Thomas with Matt Hargett

Pragmatic programmers use feedback to drive their development and personal processes. The most valuable feedback you can get while coding comes from unit testing. Now in it’s second edition, Pragmatic Unit Testing in C# with NUnit, 2nd Ed. will show you how to do software unit testing, of course, but more importantly will show you what to test.

New for the Second Edition:

Without good tests in place, coding can become a frustrating game of “whack-a-mole.” That’s the carnival game where the player strikes at a mechanical mole; it retreats and another mole pops up on the opposite side of the field. The moles pop up and down so fast that you end up flailing your mallet helplessly as the moles continue to pop up where you least expect them. You need automated testing and regression testing to keep the moles from popping up.

With this book, you will:

Real software unit testing will make your life easier. It will make your software design and architecture better and drastically reduce the amount of time you spend debugging you .NET code.

I’ve read all the .NET unit testing books out there, and this is definitely the best. I would recommend it for both professional testers and developers.

Andy Hunt and Dave Thomas are coauthors of the original Pragmatic Programmer, several books since, and founded the Pragmatic Bookshelf.