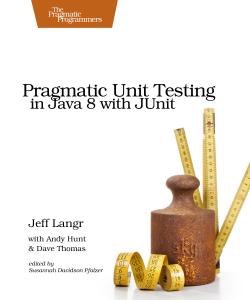 by Jeff Langr, with Andy Hunt and Dave Thomas

The Pragmatic Programmers classic is back! Freshly updated for modern software development, Pragmatic Unit Testing in Java 8 With JUnit teaches you how to write and run easily maintained unit tests in JUnit with confidence. You’ll learn mnemonics to help you know what tests to write, how to remember all the boundary conditions, and what the qualities of a good test are. You’ll see how unit tests can pay off by allowing you to keep your system code clean, and you’ll learn how to handle the stuff that seems too tough to test.

Pragmatic Unit Testing in Java 8 With JUnit steps you through all the important unit testing topics. If you’ve never written a unit test, you’ll see screen shots from Eclipse, IntelliJ IDEA, and NetBeans that will help you get past the hard part—getting set up and started.

Once past the basics, you’ll learn why you want to write unit tests and how to effectively use JUnit. But the meaty part of the book is its collected unit testing wisdom from people who’ve been there, done that on production systems for at least 15 years: veteran author and developer Jeff Langr, building on the wisdom of Pragmatic Programmers Andy Hunt and Dave Thomas. You’ll learn:

You won’t just learn about unit testing in theory—you’ll work through numerous code examples. When it comes to programming, hands-on is the only way to learn!

You’ll need the Java SDK (Software Development Kit) version 8 or higher to work through the examples in the book. You’ll also want an IDE (Integrated Development Environment) in which to build code. While most of the book doesn’t assume use of any specific IDE, you’ll find a number of “getting started” screen shots to help you if you’re using Eclipse, IntelliJ IDEA, or NetBeans. Chances are good you’ll be working in one of those!

Jeff Langr is a veteran software developer with well over three decades experience building software and helping others learn how to do so. Jeff develops software for Outpace Systems, Inc., and still provides help to customers through Langr Software Solutions, Inc. Jeff’s prior Pragmatic Bookshelf titles include Agile in a Flash (with Tim Ottinger) and Modern C[]{.underline} Programming with Test-Driven Development.

Andy Hunt has written and co-written over a half-dozen previous titles, including the classic The Pragmatic Programmer, Practices of an Agile Developer, Pragmatic Thinking & Learning, and Learn to Program with Minecraft Plugins, and regularly speaks at conferences on software development around the world.

Dave Thomas is a programmer who likes to evangelize cool stuff. He cowrote The Pragmatic Programmer, and was one of the creators of the Agile Manifesto. His book Programming Ruby introduced the Ruby language to the world, and Agile Web Development with Rails helped kickstart the Rails revolution.