by Esther Derby and Diana Larsen, Foreword by Ken Schwaber 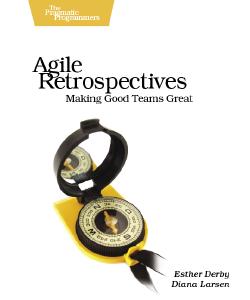 by Esther Derby and Diana Larsen, Foreword by Ken Schwaber

See how to mine the experience of your software development team continually throughout the life of the project. The tools and recipes in this book will help you uncover and solve hidden (and not-so-hidden) problems with your technology, your methodology, and those difficult “people issues” on your team.

NEW: Join Esther Derby in an online course for retrospectives. The course builds on the material in the book, going to greater depth about how the parts fit together, choosing a focus, how to thing about data, and more. All participants are invited to a dedicated Slack team, where they can ask questions, offer experiences, and learn from what other people are doing.

Two of the software industry’s leading facilitators have taken their many years of retrospective experience and distilled them into an approachable reference for agile team leaders. For all of the self-made facilitators out there who have been winging it, this book will provide a solid foundation to improve the effectiveness of your iteration, release, and project retrospectives.

Esther Derby and Diana Larsen have written the definitive book on agile retrospectives. You don’t have to be an agile team to take advantage of their book; you only have to want to improve. Follow their advice and your teams will be more successful.

Project retrospectives help teams examine what went right and what went wrong on a project. But traditionally, retrospectives (also known as “post-mortems”) are only held at the end of the project—too late to help. You need agile retrospectives that are iterative and incremental. You need to accurately find and fix problems to help the team today.

Now Esther and Diana show you the tools, tricks and tips you need to fix the problems you face on a software development project on an on-going basis. You’ll see how to architect retrospectives in general, how to design them specifically for your team and organization, how to run them effectively, how to make the needed changes and how to scale these techniques up. You’ll learn how to deal with problems, and implement solutions effectively throughout the project—not just at the end.

This book will help you:

With regular tune-ups, your team will hum like a precise, world-class orchestra.

Esther Derby is one of the rare breed of consultants who blends the technical and managerial issues with the people-side issues. She is well known for her work helping teams grow to new levels of productivity and is recognized as one of the world’s leaders in retrospective facilitation. Esther’s articles have appeared in Better Software (formerly STQE), Software Development, Cutter IT Journal, and CrossTalk. She writes regular columns for stickyminds.com and Computerworld.com, and publishes the quarterly newsletter, insights. Esther is also a host and session leader at the Amplifying Your Effectiveness (AYE) conference.

Diana Larsen partners with leaders of software development projects to improve project performance, support and sustain change, and build collaborative workplaces. Diana serves on the boards of the Agile Alliance and the Pacific Northwest Software Quality Conference, participates in planning for the XP 200x and Agile 200x conferences, and speaks at several software conferences every year. She’s written articles for Software Development, At Work, Cutter IT Journal, and Cutter’s Executive Update and e-Advisor series. Diana is a founder of the Annual International Retrospective Facilitators Gathering.

With Norm Kerth, Esther and Diana are founders of the annual Retrospective Facilitators Gathering. They are recognized as two of the world’s leaders in retrospective facilitation.