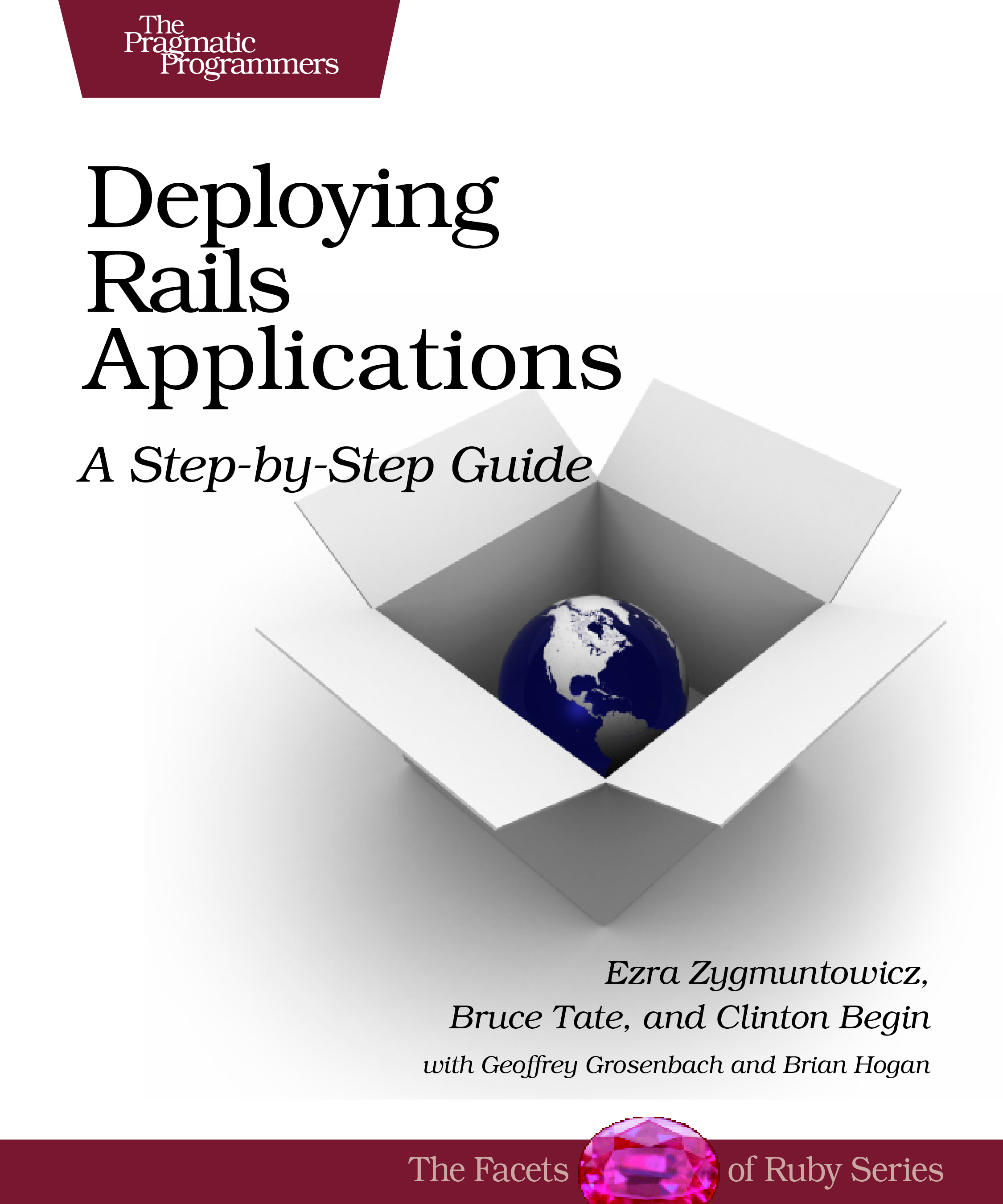 Until now, the information you needed to deploy a Ruby on Rails application in a production environment has been fragmented and contradictory. This book changes all of that by providing consistent, levelheaded advice you can trust. You’ll get the inside angle from those that have built, deployed, and maintained some of the largest Rails apps in production, anywhere.

First you’ll learn how to build out your shared, virtual, or dedicated host. Then, you’ll see how to build your applications for production and deploy them with one step, every time. Deploying Rails Applications will take you from a simple shared host through a highly scalable clustered and balanced setup with Nginx.

See how to tell whether you’ve bought enough firepower, and learn how to optimize your Rails projects applications in a systemic, rational way. Take advantage of advanced caching techniques, and become and expert with the latest servers in Nginx and Mongrel. Don’t worry. You’ll get a dose of Apache too.

Not only will you learn how to configure your production environment, you’ll also see how to monitor it with free, automated tools that can restart your servers when the memory use gets too high for comfort. You’ll see how to take a performance baseline, profile for bottlenecks, and solve the most common performance problems you’re likely to see.

Ezra Zygmuntowicz is a co-founder of EngineYard.com, a scalable Rails hosting service. He is the author of the Rails Deployment book for the Pragmatic Programmers and has contributed many open source Ruby and Rails related projects such as BackgrounDrb, ez-where, Rubinius and Merb. He is a speaker at The Rails Edge, the 2006 & 2007 RailsConf and the 2007 SDForum Ruby conference as well as The Ruby HoeDown and RubyEast. He has been working with Ruby for over 4 years now and picked up Rails in the summer of 2004. In his spare time he likes to hack Ruby, Scheme and Erlang and tinker with his vintage 54 VW beetle.

Bruce Tate is a father, kayaker, author and independent consultant in Austin, Tx. He is the author of seven books, including the best selling Bitter series, the Jolt-winning Better, Faster, Lighter Java, the Spring Developer’s Notebook, and From Java To Ruby: Things Every Manager Should Know.

Clinton Begin has built a presence in both the enterprise and open source
communities. Having consulted as a Senior Developer and Agile Mentor for
industry greats such as ThoughtWorks, Microsoft and Stanford University, his
experiences have spanned a broad range of business and technical domains.
Clinton has applied agile methodologies, open source software, Java, .NET
and Ruby to the development of large-scale applications. He is an
experienced author, speaker, and has delivered formal presentations and
training from San Francisco to New York City.