by Stuart Halloway and Justin Gehtland 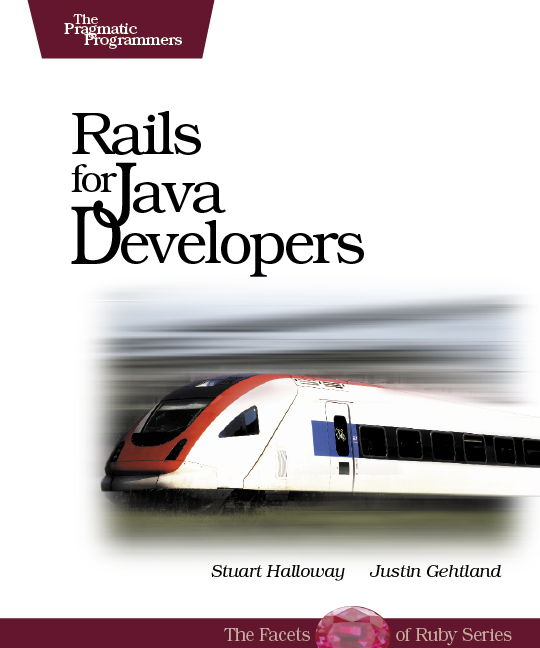 by Stuart Halloway and Justin Gehtland

Many Java developers are now looking at Ruby, and the Ruby on Rails web framework. If you are one of them, this book is your guide. Written by experienced developers who love both Java and Ruby, this book will show you, via detailed comparisons and commentary, how to translate your hard-earned Java knowledge and skills into the world of Ruby and Rails.

If you are a Java developer trying to learn Rails, this book is the place to start. There is no better resource for quickly coming up to speed with Rails, Ruby, Rake, and ActiveRecord.

Stu and Justin offer the Java developer the unique opportunity to ‘get’ Rails by presenting the Rails stack from a perspective that’s familiar and comfortable. In doing so, they prove that Rails and Java don’t have to be mutually exclusive.

If you are a Java developer and you want to explore Ruby on Rails, this is the book to get. Justin and Stu do a masterful job of revealing the intricacies of Ruby and Ruby on Rails from a Java developer’s perspective. Not only that, this book is extremely well written, and is a pleasure to read.

Stuart and Justin have pulled off what I once thought was an impossible feat: consolidating all the knowledge that a Java developer needs to understand Ruby on Rails. Until this book, you would have to read at least three books (and thousands of pages) to get the same understanding encapsulated in this excellent text. They clearly understand both sides of the equation (RoR and Java), which allows them to cut through irrelevancies and hone in on the important topics. This book should be required reading for more than just the people learning Rails: every Java developer will benefit from learning the important lessons that Rails teaches.

Every Java developer should be exposed to ideas from different languages, and Ruby/Rails is a wellspring of good ideas. Read this book—it will help you learn Ruby and Rails, and give you new ideas transferable to Java.

If you are a Java programmer, you shouldn’t have to start at the very beginning! You already have deep experience with the design issues that inspired Rails, and can use this background to quickly learn Ruby and Rails. But Ruby looks a lot different from Java, and some of those differences support powerful abstractions that Java lacks. We’ll be your guides to this new, but not strange, territory.

In each chapter, we build a series of parallel examples to demonstrate some facet of web development. Because the Rails examples sit next to Java examples, you can start this book in the middle, or anywhere else you want. You can use the Java version of the code, plus the analysis, to quickly grok what the Rails version is doing. We have carefully cross-referenced and indexed the book to facilitate jumping around as you need to.

Thanks to your background in Java, this one short book can cover a half-dozen books’ worth of ideas:

Justin Gehtland is a founding partner of Relevance, LLC. Justin has been a programmer, manager, consultant and trainer in the software business since 1994. He’s currently focused on Ruby, Ruby on Rails, and Ajax. Justin is the co-author of Pragmatic Ajax, Spring: A Developer’s Notebook, J2EE In a Nutshell (3rd Edition), Better, Faster, Lighter Java, and Effective Visual and Windows Forms Programming in Visual Basic .NET.

Stuart Dabbs Halloway is a co-founder of Relevance, LLC. Stuart is the author of Component Development for the Java Platform and regularly speaks at industry events including the No Fluff, Just Stuff Java Symposiums and the Pragmatic Studio.