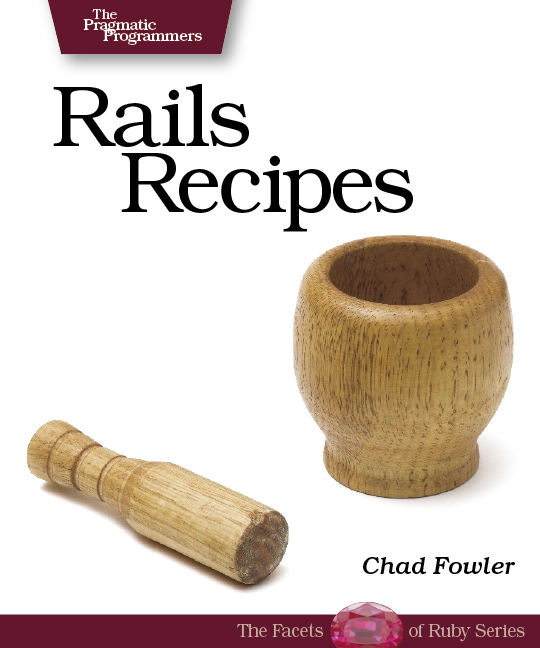 You’ve read the tutorials and watched the online videos. You have a strong grasp of all of the ingredients that make up a successful Rails application. But ingredients don’t just turn themselves into a meal. Chad Fowler’s Rails Recipes is a collection of recipes that will take you step by step through the the most cutting edge Rails techniques, mixing the ingredients to create world-class web applications. Learn how to do it, and how to do it right.

This book definitely kicks ass. After I bought it I briefly skimmed it over and thought to myself, ‘Hm, these look alright, not sure how many I’ll be using though, I could do most of it on my own.’ Started a new project later that day and immediately used four of the recipes!

One of the things I really like is that it shows just how easy some of the stuff really is. For example, I hate writing authentication systems, and so have looked at using different generators, LoginEngine, etc. I could certainly write a simple auth system myself, but I don’t know how big it would be, which discourages me from doing so. When I see a basic system done in 5 pages of text and maybe 50 lines of code, there’s no uncertainty and I’m happy to knock it out.

Just wanted to ditto the “thanks!”…this book IS awesome. I highly recommend it to the Rails community. It’s actually being used just as much as my Agile book…and, it’s not even finished yet. If you’d rather not wade through edge source code, and want applicable examples…get the book!

Chad… the Polymorphic and Join table examples were exactly what I needed. I owe you a beer (or brewery for that matter), come RailsConf!

Watch the movie for
Rails Recipes

Rails is large, powerful, and new. How do you use it effectively? How do you harness the power? And, most important, how do you get high-quality, real-world applications written?

From the latest Ajax effects to time-saving automation tips for your development process, Rails Recipes will show you how the experts have already solved the problems you have.

With this book, you’ll:

See the tricks the experts use when writing Rails. Owning Rails Recipes is like having the best Rails programmers sitting next to you when you code.

Chad Fowler has been a software developer and manager for some of the world’s largest corporations. He recently lived and worked in India, setting up and leading an offshore software development center. He is cofounder of Ruby Central, Inc., a non-profit corporation responsible for the annual International Ruby Conference and the International Rails Conference, and is a leading contributor in the Ruby community. Chad is a contributor and editor for numerous books and is author of the recently released My Job Went to India: 52 Ways to Save Your Job.