A Scrum Book: The Spirit of the Game 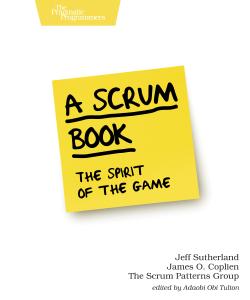 The Spirit of the Game

Gain insights and depth of rationale into Scrum from many highly respected world authorities, including one of its founders, who lead you through the deep foundations of Scrum’s structure and practice. Enhance and customize your Scrum practice with ninety-four organizational building blocks, called patterns, that you can freely and flexibly choose from to fit your needs. Understand and appreciate the history of Scrum and the role it plays in solving common problems in product development.

Number One on Book Authority.

There’s a lot of wisdom in this book that is applicable and useful outside of a Scrum context. The patterns are pragmatic, engaging, and very well executed—a true joy to read.

A Scrum Book: The Spirit of the Game is a valuable, well-organized resource whether
for team members in the early days of their Scrum journey, for journeymen
ScrumMasters looking to add techniques and approaches to their toolkit as they
unlock more complex improvement efforts, or for master coaches looking for a
well-structured body of knowledge into which to integrate and evolve their own
patterns. Practices, tools, and principles (the what) are surfaced for us as we go
about our daily work, and Sutherland, Coplien, et al. lay bare the philosophy,
thinking, and reasoning (the why) to facilitate our learning.

Within minutes of opening A Scrum Book: The Spirit of the Game, I implemented
my first Scrum pattern and raised the level of my team’s software game. I’ve
dabbled in Scrum practices for years, but after reading this book, I have gained
a deeper appreciation for the nuances behind those practices and how they work
in concert to create an elegant whole. This book is a must read for anyone who
works on a team to build software.

Staff Software Engineer and author of _Design It!_, LendingHome

This is a book for all Scrum practitioners, veterans as well as newbies. Starting
with the first pattern (The Spirit of the Game) and continuing throughout the
book, it’s about people. You will be able to use the book and its patterns as a
source of inspiration when you create your way of working according to Scrum.
The book and its patterns cover the what of Scrum as well as its whys. There is
no need to wait. Get it! Read it! Use it! Improve!

The book’s use of Zen principles and the lessons from Japanese industrial culture
makes this an incredibly fun read. It’s extremely informative and I’m sure I’ll
continue to pick it up frequently to review the wise recommendations contained
within.

You hold in your hands a work of art that will inspire, support, and challenge you
and your organization to be better for the greater good. And have lots of fun while
doing it.

Author of "The Dream Team Nightmare" and Agile Coach

Building a successful product usually involves teams of people, and many choose the Scrum approach to aid in creating products that deliver the highest possible value. Implementing Scrum gives teams a collection of powerful ideas they can assemble to fit their needs and meet their goals. The ninety-four patterns contained within are elaborated nuggets of insight into Scrum’s building blocks, how they work, and how to use them. They offer novices a roadmap for starting from scratch, yet they help intermediate practitioners fine-tune or fortify their Scrum implementations. Experienced practitioners can use the patterns and supporting explanations to get a better understanding of how the parts of Scrum complement each other to solve common problems in product development.

The patterns are written in the well-known Alexandrian form, whose roots in architecture and design have enjoyed broad application in the software world. The form organizes each pattern so you can navigate directly to organizational design tradeoffs or jump to the solution or rationale that makes the solution work. The patterns flow together naturally through the context sections at their beginning and end.

Learn everything you need to know to master and implement Scrum one step at a time—the agile way.

Jeff Sutherland is the co-creator of Scrum. Author of Scrum: The Art of Doing Twice the Work in Half the Time (about 100,000 copies sold), and other titles. He holds a PhD in Medicine.

James O. Coplien was an early influencer of Scrum, a co-founder of the Hillside Group (the software pattern movement) and co-author of Organizational Patterns of Agile Software Development, Advanced C++ (70,000 copies sold), and several other titles. He holds a doctorate in Philosophy and a PhD in Computer Science.