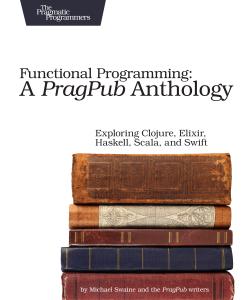 If you’ve been wondering what all the functional hubbub is about, Functional
Programming: A PragPub Anthology will satisfy. You can wet your whistle with
several languages, get a feel for how to think functionally, and do so without
overcommitting to one language or school of thought.

Programming’s last sea change was in the 1990s when object orientation went
mainstream. It’s happening again, but this time it’s functional programming that’s
sweeping through our profession. Read this book to understand why and to learn
how to ride the wave.

I really enjoyed the structure and flow of the book. The chapters stand on their
own as essays but when put together make a strong argument for functional
programming, regardless of the language. It’s also a treat to see all these different
familiar writers write about diverse languages.

You’re sure to find a way functional programming resonates with you with the
wealth of approaches and languages covered. The treatment of Scala collection is
superb: everything a beginner needs to know from the get-go!

Functional programming is on the rise because it lets you write simpler, cleaner code, and its emphasis on immutability makes it ideal for maximizing the benefits of multiple cores and distributed solutions. So far nobody’s invented the perfect functional language—each has its unique strengths. In Functional Programming: A PragPub Anthology, you’ll investigate the philosophies, tools, and idioms of five different functional programming languages.

See how Swift, the development language for iOS, encourages you to build highly scalable apps using functional techniques like map and reduce. Discover how Scala allows you to transition gently but deeply into functional programming without losing the benefits of the JVM, while with Lisp-based Clojure, you can plunge fully into the functional style. Learn about advanced functional concepts in Haskell, a pure functional language making powerful use of the type system with type inference and type classes. And see how functional programming is becoming more elegant and friendly with Elixir, a new functional language built on the powerful Erlang base.

The industry has been embracing functional programming more and more, driven by the need for concurrency and parallelism. This collection of articles will lead you to mastering the functional approach to problem solving. So put on your explorer’s hat and prepare to be surprised. The goal of exploration is always discovery.

Five Questions for the Editor of Functional Programming: A PragPub Anthology

A: PragPub is a monthly magazine by and for software developers that I created in 2009 for the Pragmatic Programmers. It began as a showcase for the authors of their books, and has evolved into an independent publication. But we still have a close relationship with the Pragmatic Programmers, and we still feature many of their authors. This book, for example, includes chapters by Stuart Halloway, Venkat Subramaniam, and Dave Thomas, all of whom have written well-received books on the subjects they write about in this book.

Q: OK, how about the Anthology part? This is a collection of articles from the magazine?

A: It’s that, but I tried to put together a book that makes sense on its own. The chapters here are based on a selection from over a thousand articles we’ve published in the course of the past eight years. The idea was to look at one topic from a variety of perspectives, and with each perspective to have some introductory chapters and some more advanced chapters. Once I settled on a topic, I had a lot of articles on this topic to choose from, and I left out some really good ones because they didn’t fit the purpose of this particular book. Maybe they’ll be in the next one.

Q: And that one topic is functional programming?

Q: So readers can see which approach they prefer?

A: That, and because there’s virtue in seeing the same idea from different perspectives. You get a more rounded mental model of the concept. Take the avoidance of mutable state. That’s considered a defining feature of functional programming, but you see it differently if you think of it as a useful technique to use in certain circumstances as opposed to the default way to write functions. Seeing it from both those perspectives, I’m convinced, leads to a richer understanding.

Q: You mentioned the next book. Will there be more PragPub Anthologies?

A: The market willing. I have two more in the planning stages. Functional programming was a pretty obvious place to start. It’s a hot topic for programming books right now and it’s a particular interest of mine. We’ll probably return to it with a different approach, because there’s definitely a good solid book’s worth of functional programming material in the magazine. But the next one will probably be something quite different. And of course we keep publishing the magazine. The key article that the whole book coalesces around may be one we publish next month, or the next.

Familiarity with one or more programming languages.