by Stuart Halloway and Aaron Bedra 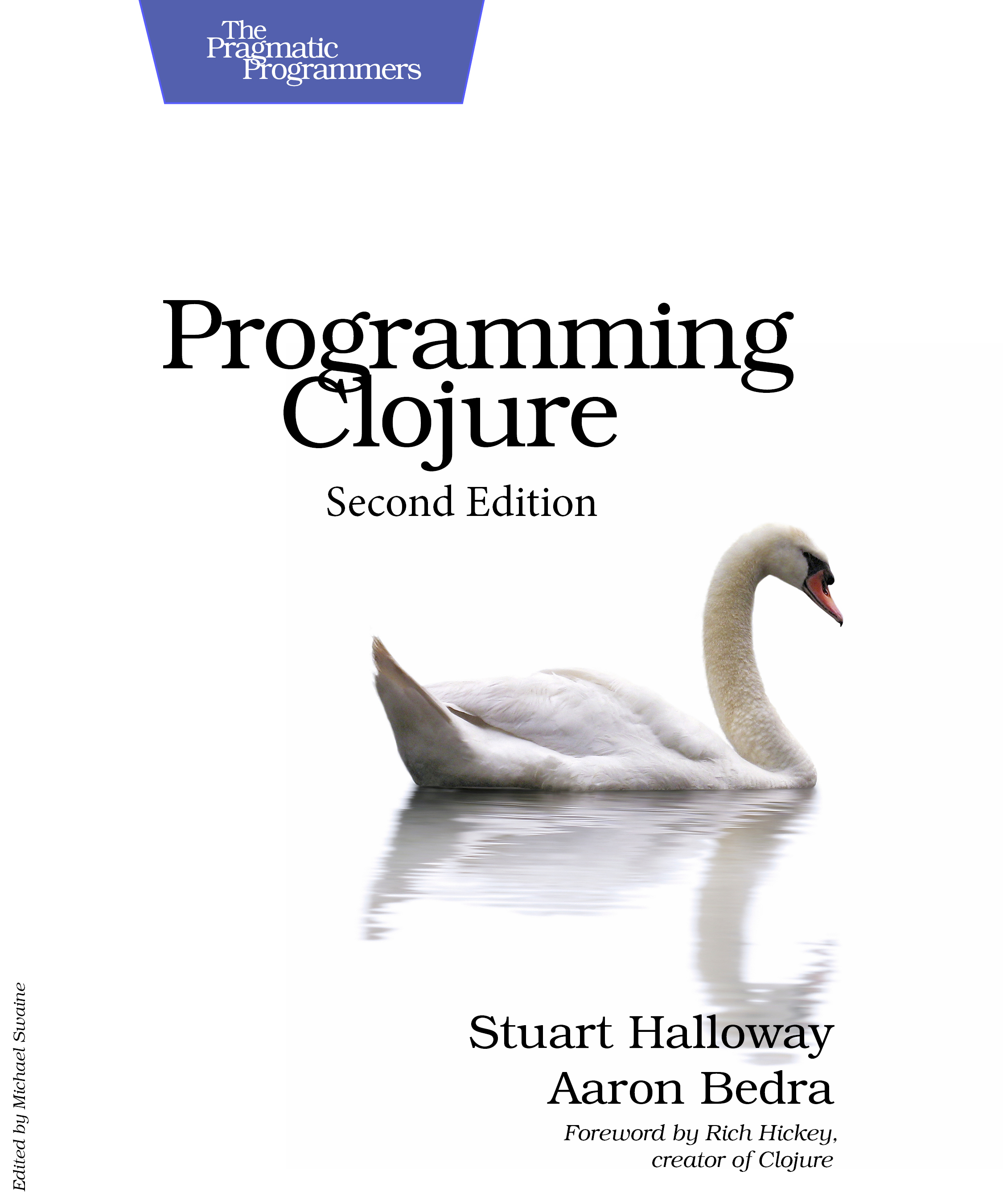 by Stuart Halloway and Aaron Bedra

If you want to keep up with the significant changes in this important language, you need the second edition of Programming Clojure. Stu and Aaron describe the modifications to the numerics system in Clojure 1.3, explain new Clojure concepts such as Protocols and Datatypes, and teach you how to think in Clojure.

The 268-page book is well-organized and well written, and it offers numerous practical code examples.

Clojure is one of the most interesting languages out there right now, and the best
way of learning Clojure just got better. The second edition of “Programming Clojure”
adds up-to-date information, plenty of practical examples, and a ton of useful
tips on how to learn, work with, and succeed with Clojure.

Intimidated by Clojure? You won’t be after you read this book. Written in a clear
and enjoyable style, it teaches the language one small piece at a time in a very
accessible way.

The authors have charted the smoothest path yet to Clojure fluency with this
well-organized and easy-to-read book. They have a knack for creating simple
and effective examples that demonstrate how the language’s unique features
fit together.

Clojure is a beautiful, elegant, and very powerful language on the JVM. It’s
like a cathedral: you could wander into it, but you’d prefer the company of a
knowledgeable guide who can give you their perspective, to help you grasp and
appreciate the architecture and the art. In this book you can enjoy and benefit
from the company of not one, but two seasoned developers who have the depth
of knowledge and the perspective you need.

Programming Clojure, 2nd Edition is a significant update to the classic book on the Clojure language. You’ll get thorough coverage of all the new features of Clojure 1.3, and enjoy reorganized and rewritten chapters that reflect the significance of new Clojure concepts. Many code examples have been rewritten or replaced, and every page has been reevaluated in the light of Clojure 1.3.

As Aaron and Stu show you how to build an application from scratch, you’ll get a rich view into a complete Clojure workflow. And you’ll get an invaluable education in thinking in Clojure as you work out solutions to the various parts of a problem.

Clojure is becoming the language of choice for many who are moving to functional programming or dealing with the challenges of concurrency. Clojure offers:

It’s the combination of these features that makes Clojure sparkle. Programming Clojure, 2nd Edition shows you how to think in Clojure, and to take advantage of these combined strengths to build powerful programs quickly.

Stuart Halloway is a member of Clojure/core and CTO at Relevance, where he spends his time on secret projects for world domination, and watching Phineas and Ferb.

Aaron Bedra has been a member of Clojure/core and a developer at Relevance, Inc. where he spent his time as a tech lead, speaker and author. He is a frequent contributor to the Clojure language and its supporting libraries as well as an active member of the Clojure community. Aaron has led the development of several commercial Clojure projects. He currently works at Groupon.