The dRuby Book: Distributed and Parallel Computing with Ruby 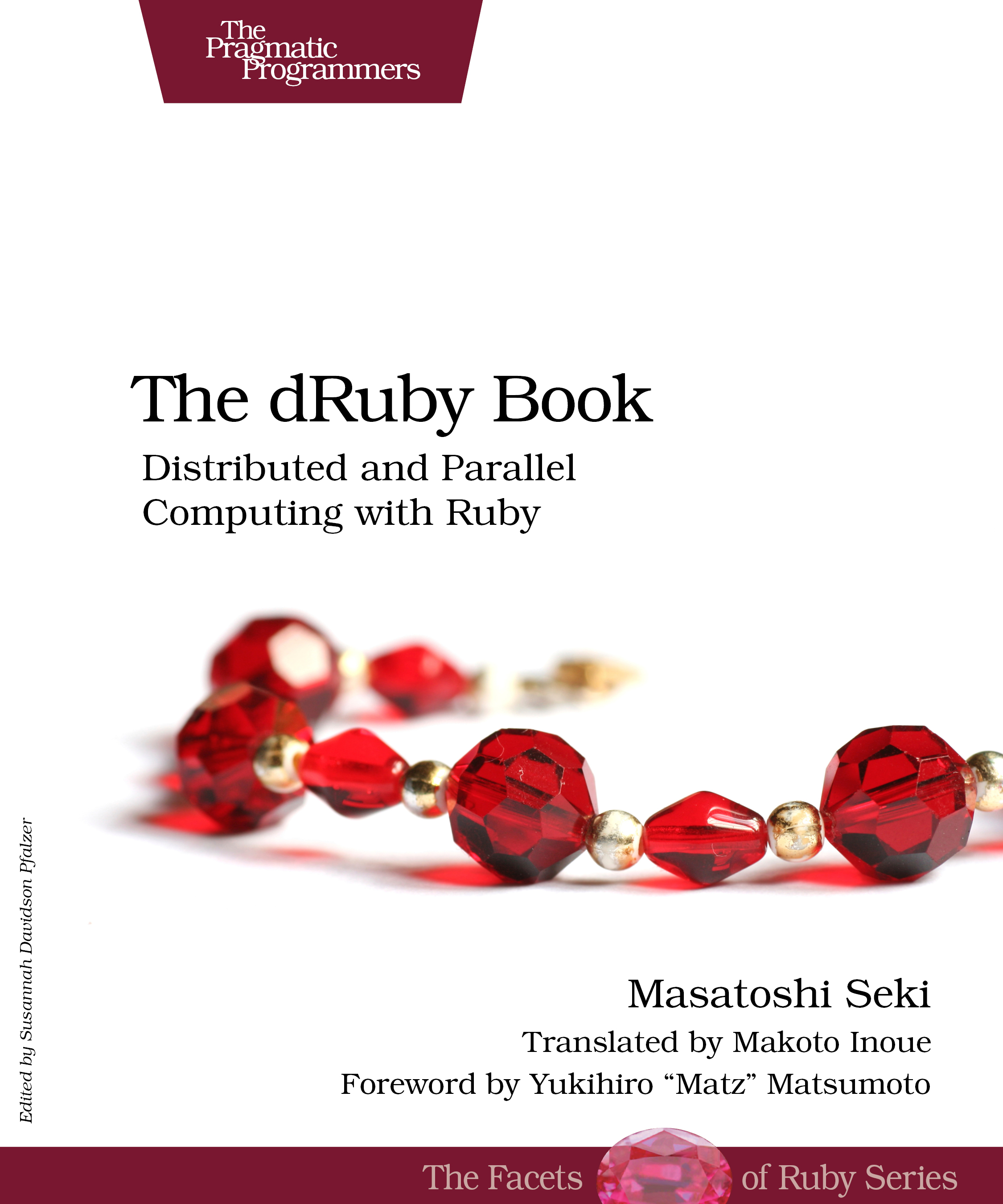 Distributed and Parallel Computing with Ruby

Learn from legendary Japanese Ruby hacker Masatoshi Seki in this first English-language book on his own Distributed Ruby library. You’ll find out about distributed computing, advanced Ruby concepts and techniques, and the philosophy of the Ruby way—-straight from the source.

A fascinating and informative look at what is classically a total pain in the neck:
distributed object management and process coordination on a single machine or
across a network.

Any programmer wanting to understand concurrency and distributed systems
using Ruby should read this book. The explanations and example code make
these topics approachable and interesting.

dRuby naturally extends the simplicity and power Ruby provides. Throughout
this book, Rubyists should be able to enjoy a conversation with dRuby that makes
you feel as if your own thoughts are traveling across processes and networks.

dRuby is the key component that liberates Ruby objects from processes and
machine platforms. Masatoshi himself explains its design, features, case studies,
and even more in this book.

dRuby has been part of the Ruby standard library for more than a decade, yet few know the true power of the gem. Completely written in Ruby, dRuby enables you to communicate between distributed Ruby processes as if there were no boundaries between processes. This is one of the few books that covers distributed and parallel programming for Ruby developers.

The dRuby Book has been completely updated and expanded from its Japanese version, with three new chapters written by Masatoshi-san. You’ll find out about the design concepts of the dRuby library, and walk through step-by-step tutorial examples. By building various distributed applications, you’ll master distributed programming as well as advanced Ruby techniques such as multithreading, object references, garbage collection, and security. Then you’ll graduate to advanced techniques for using dRuby with Masatoshi-san’s other libraries, such as eRuby and Rinda—-the Ruby version of the Linda distributed tuplespace system. In the three new chapters, you’ll see how to integrate dRuby and eRuby, get a thorough grounding in parallel programming concepts with Rinda, and create a full text search system using Drip.

Ruby 1.9.2 or above. All exercises were run on OS X, though it should work on any operating system. You are expected to be comfortable reading Ruby code, as we do not explain basic syntax.

Q. In a nutshell: what is dRuby?

A. dRuby is a distributed object system. More precisely, it’s a library for Remote Method Invocation (RMI). You can easily publish your objects to others, or call objects in other processes.

Q. How is dRuby different from other distributed object systems? What’s unique about it?

A. The biggest difference is that dRuby is designed for (and written in) Ruby. It is ridiculously easy to start using distributed object systems. dRuby inherits lots of good parts from Ruby. For example, you can use a method with block, and dRuby dynamically chooses how to send a remote object, so you don’t have to describe an interface or its transportation method.

Q. How can dRuby and distributing programming change the way we develop our apps?

Q. You’ve written a few other libraries – how do they interact with dRuby and what will we find useful about them?

In my book, I used dRuby as a glue to integrate with various other libraries of mine. For example, I used it with Rinda to turn its inter-thread coordination mechanism into inter-process coordination. I also turned the ERB templating system into a separate server to minimize preprocessing cost.

Many of my libraries have profound thoughts and ideas behind a relatively small number of APIs. It’s hard to grasp the whole picture just by glancing at API references. In this book, I provide various examples for combining these libraries to reveal their full intention and usefulness.

Q. If there’s one thing we should take away from your book, what would that be?

Many of my libraries are small and simple, but with deep philosophy behind them. My goal is for you to understand the thinking behind my libraries and use this understanding to strengthen your design skills.

Translator Makoto Inoue is a database administrator turned Ruby developer living in London. He is passionate about evangelizing interesting, lesser-known technologies. He speaks about mobile development, NoSQL, and Real Time Web at conferences and meetups.