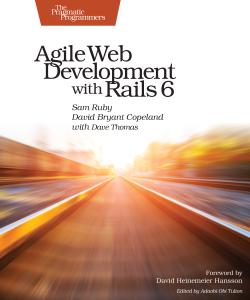 Learn Rails the way the Rails core team recommends it, along with the tens of thousands of developers who have used this broad, far-reaching tutorial and reference. If you’re new to Rails, you’ll get step-by-step guidance. If you’re an experienced developer, get the comprehensive, insider information you need for the latest version of Ruby on Rails. The new edition of this award-winning classic is completely updated for Rails 6 and Ruby 2.6, with information on processing email with Action Mailbox and managing rich text with Action Text.

At times Rails can feel magical. That’s part of what makes it so productive and powerful. But until you understand the “magic”, trying to build a Rails app can be just plain frustrating!

How much more satisfying would it be to pop open your code editor next week and confidently jump into a Rails app? Build a new feature you can be proud of. Laugh in the face of error messages because you know how to fix them. Heck, even deploy your app.

You can do this. The “magic” of Rails is totally understandable. For 16 years The Pragmatic Studio has been helping developers move from confusion to confidence with Rails. One concept at a time. One clear explanation at a time. One “AHA!” moment at a time.

In their online video course you build not just one, but two full-featured Rails apps from start to finish. You see every move, every change, every refactoring first hand. It’s a finely-tuned mix of videos, animations, and exercises that have demystified Rails for thousands of developers. In no time you’ll go from “Argh, I’m lost!” to “Aha, now I TOTALLY get it!”

Buy directly from The Pragmatic Studio.

Ruby on Rails helps you produce high-quality, beautiful-looking web applications quickly—you concentrate on creating the application, and Rails takes care of the details. Rails 6 brings many improvements, and this edition is updated to cover the new features and changes in best practices.

We start with a step-by-step walkthrough of building a real application, and in-depth chapters look at the built-in Rails features. Follow along with an extended tutorial as you write a web-based store application. Eliminate tedious configuration and housekeeping, seamlessly incorporate Ajax and JavaScript, send and receive emails, manage background jobs with ActiveJob, and build real-time features using WebSockets and ActionCable. Test your applications as you write them using the built-in unit, integration, and system testing frameworks, internationalize your applications, and deploy your applications easily and securely. New in this edition is coverage of Action Mailbox, which allows you to receive emails in your app, as well as Action Text, a zero-configuration rich text editing feature.

David Bryant Copeland has been a professional programmer since 1995. He’s the author of Build Awesome Command-Line Applications in Ruby 2 and Rails, Angular, Postgres, and Bootstrap. He has worked at LivingSocial and Opower, and is the Chief Software Architect at Stitch Fix.